More details for the \(\textrm{normal}\) distribution available at https://en.wikipedia.org/wiki/Normal_distribution. 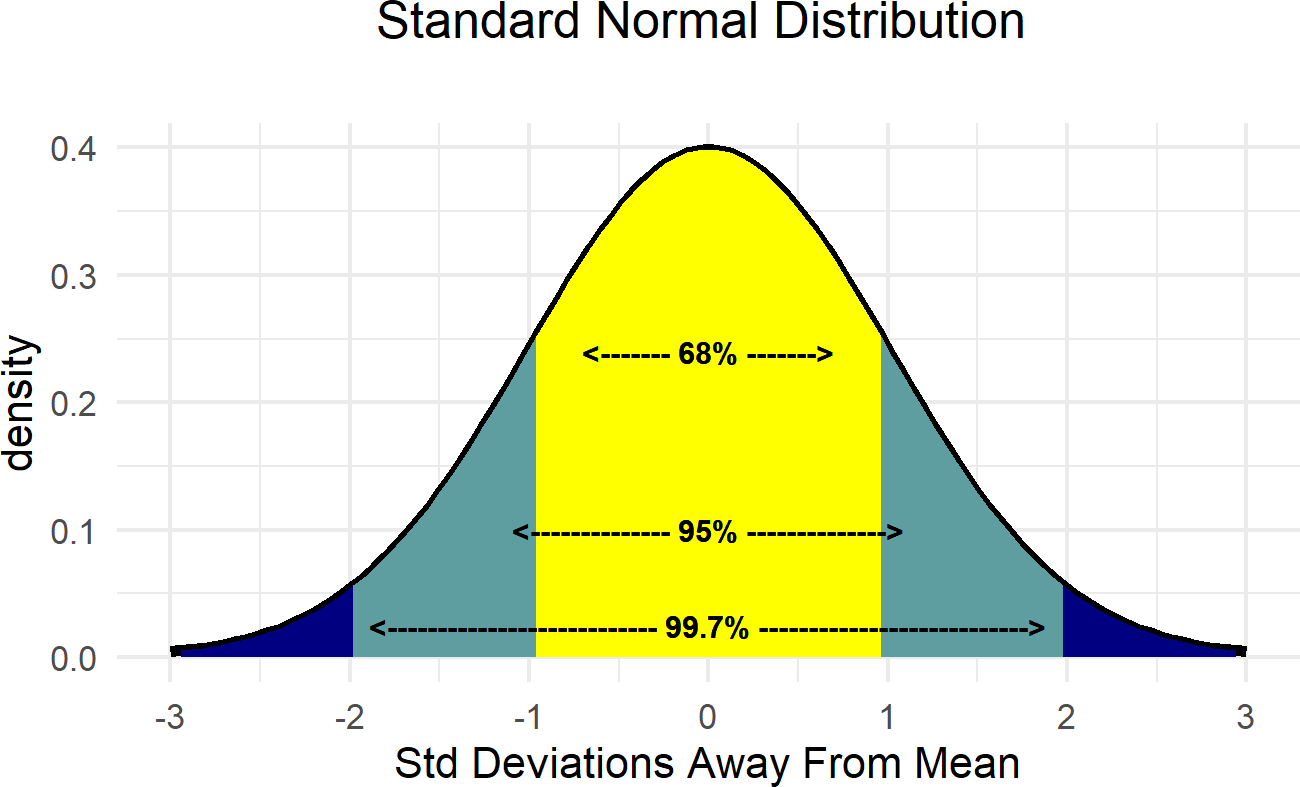 Figure 19.1: Demonstrating the relationship between the standard deviation and the mean of the normal distribution.

There is an astounding amount of data in the world that appears to be normally distributed. Here are some examples:

Here is just a sample of three normal distributions: 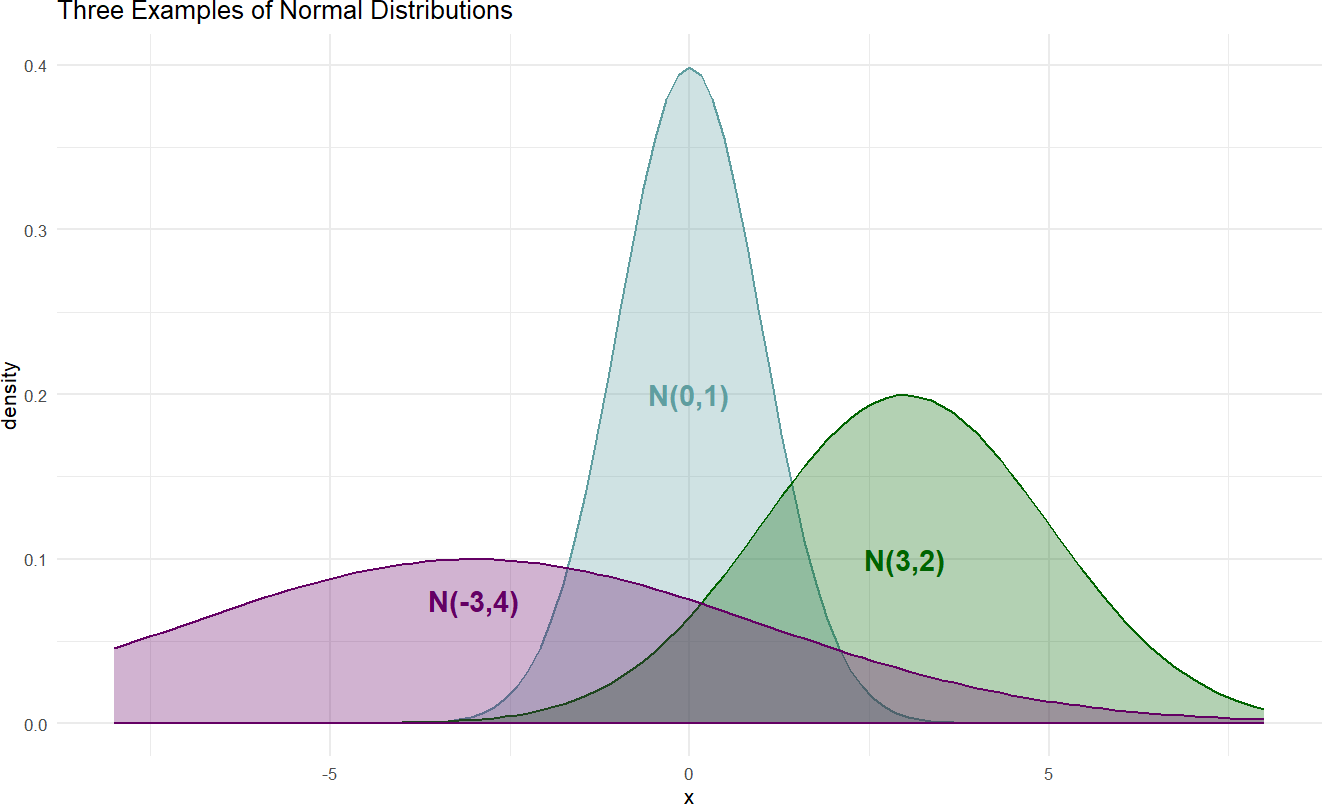 The densities of Figure 19.2 show the typical bell-shaped, symmetric curve, that we are used to. Since the \(\textrm{normal}\) distribution has two parameters, the graphical model representing our uncertainty in the generating process for normally distributed data will have three random variables (see Figure 19.3): 1) the observed data, 2) the mean \(\mu\), and 3) the standard deviation \(\sigma\).

Figure 19.3: Simple model with Normal likelihood parametrized by mu and sigma with arbitrary priors for the parameters.

and the statistical model with priors:

where the prior distributions get determined based on the context of the problem under study.

Choosing a prior on \(\sigma\) is less intuitive. What do we know about the variation in heights of individual trees? Not much. We can probably bound it though. In fact, we can be 100% certain this is greater than zero; no two cherry trees will be the same height. And I am confident, that cherry tree heights will most definitely fall within say 50 feet of the average, so let’s go with a uniform distribution bounded by 0 and 50.

After choosing our prior, we then use data to reallocate plausibility over all our model parameters. There is a built-in dataset called trees,

which we will use in combination with the following generative DAG:

Calling greta, we get our representative sample of the posterior distribution:

And then, plot the credible values which for our purposes is the 90% percentile interval of the representative sample:

Figure 19.5: Posterior distribution for the mean and standard deviation of cherry tree heights. 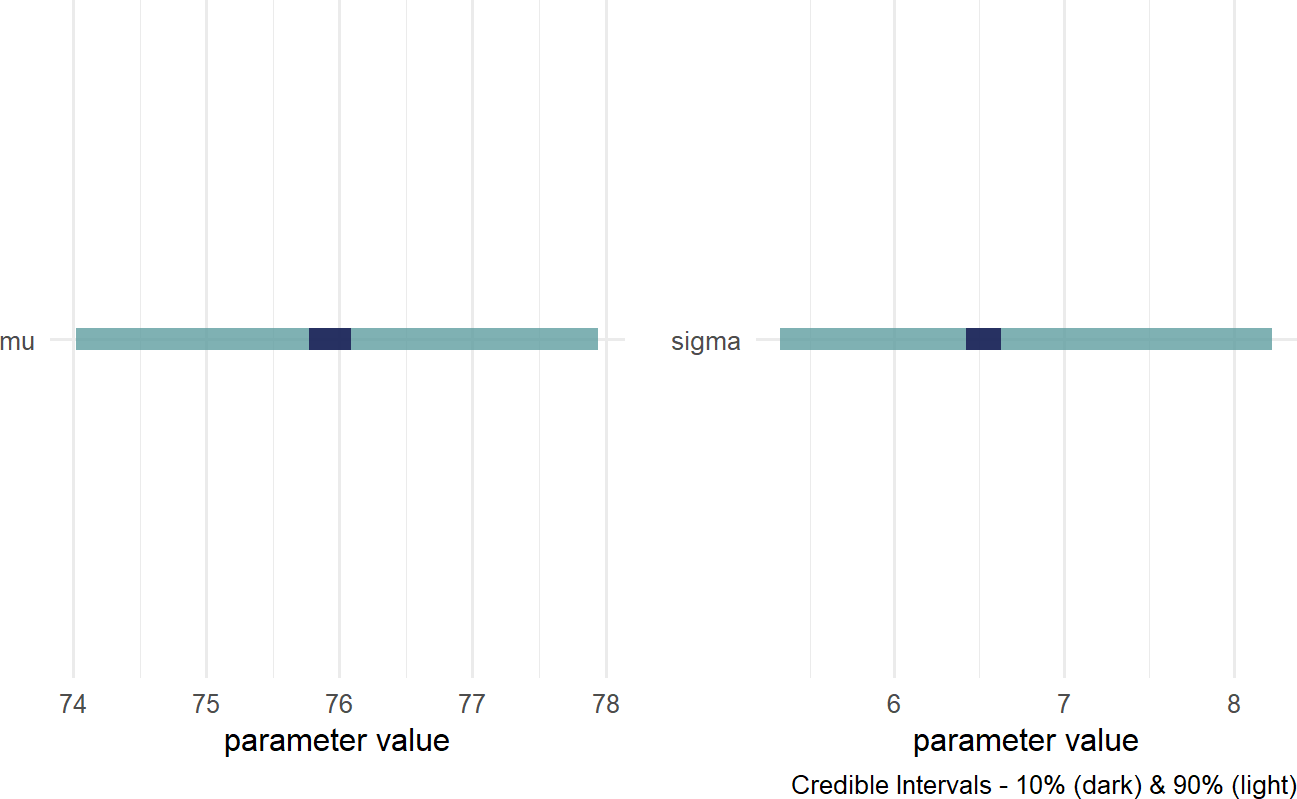 We now have insight as to the height of cherry trees as our prior uncertainty is significantly reduced. REMINDER: the posterior distribution for the average cherry tree height is no longer normally distributed and the standard deviation is no longer uniform. This is a reminder that prior distribution families do not restrict the shape of the posterior distribution. Instead of cherry tree heights averaging anywhere from 1 to 99 feet as accomodated by our prior, we now say (roughly speaking) the average height is somewhere in the 70-80 foot range. Instead of the variation in height of trees being plausibly as high as 50 feet, the height of any individual tree is most likely within 15 feet of the average height (i.e. \(\approx \mu \pm 2\sigma\)).

The support of any random variable with a normal distribution is \((-\infty,\infty)\) which means just about any value is theoretically possible - although values far away from the mean are practically impossible. Sometimes, you want a similar distribution, but one that has constrained support of \((0,\infty)\), i.e. the data is restricted to being strictly positive (even 0 has no density). The \(\textrm{gamma}\) distribution has such support. While the \(\textrm{gamma}\) distribution is often used to fit real-world data like total insurance claims and total rainfall, we will often use this distribution as a prior for another distribution’s parameters. For example, the standard deviation of a normally distributed random variable is strictly positive, so perhaps the Gamma could be appropriate for modelling uncertainty in a standard deviation parameter. Let’s take a deeper look. 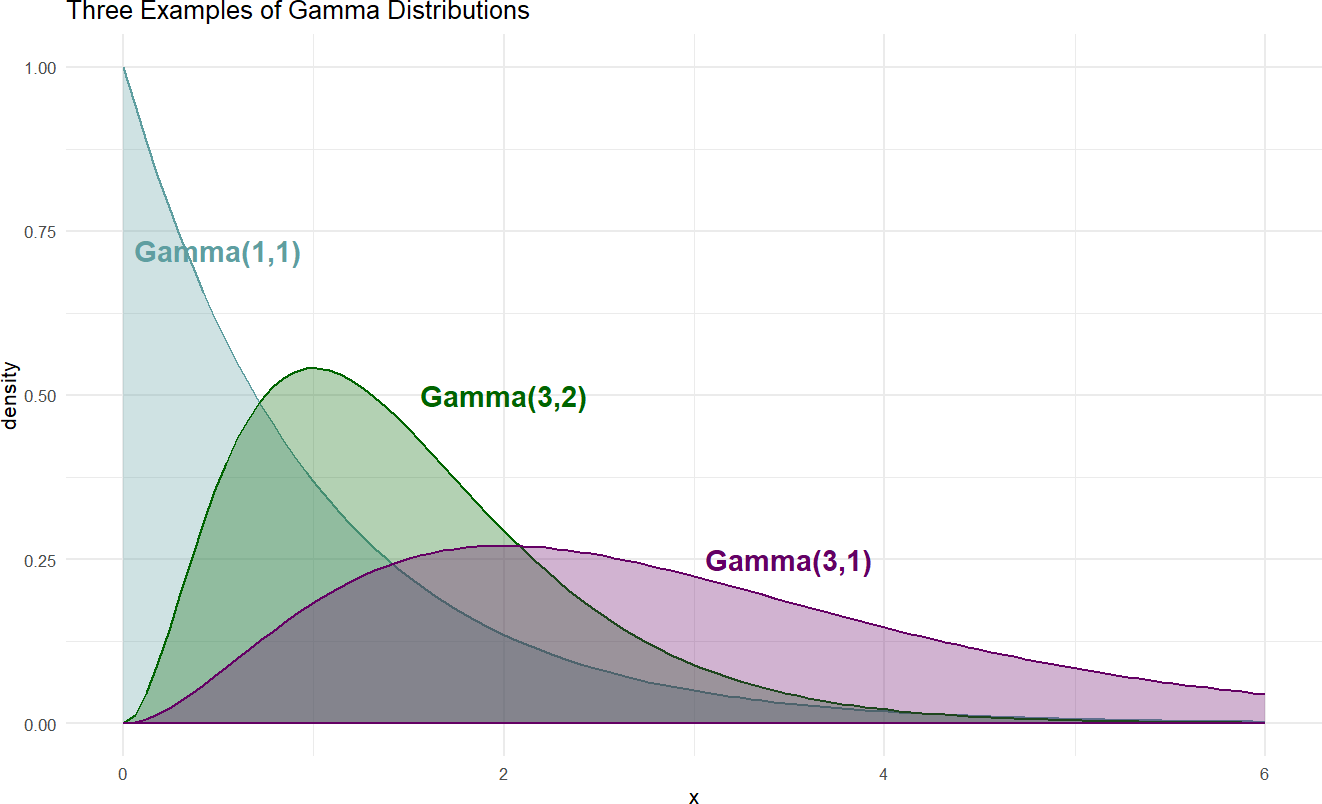 When choosing \(\alpha\) and \(\beta\) so that our prior uncertainty is accurately represented, we will use a few mathematical properties of the Gamma distribution. Assuming \(X \sim \textrm{gamma}(\alpha,\beta)\), the following properties are true:

These properties will be demonstrated when the gamma is called upon as a prior in subsequent sections.

The \(\textrm{Student t}\) distribution, as parameterized in greta, is a three parameter distribution; notated \(\textrm{Student-t}(\nu,\mu,\sigma)\). The first two, \(\mu\) and \(\sigma\), can be interpreted just as they are with the normal distribution. The third parameter, \(\nu\) (greek letter pronounced “new” and phonetically spelled “nu”), refers to the degrees of freedom. Interestingly, as \(\nu \rightarrow \infty\) (i.e. as \(\nu\) gets large) the \(\textrm{Student t}\) distribution and the normal distribution become identical; in other words, the fatter tails go away. For all of our purposes, we use a gamma prior for representing our uncertianty in \(\nu\) as recommended in https://github.com/stan-dev/stan/wiki/Prior-Choice-Recommendations.

Here is a sample of three student-t distributions: 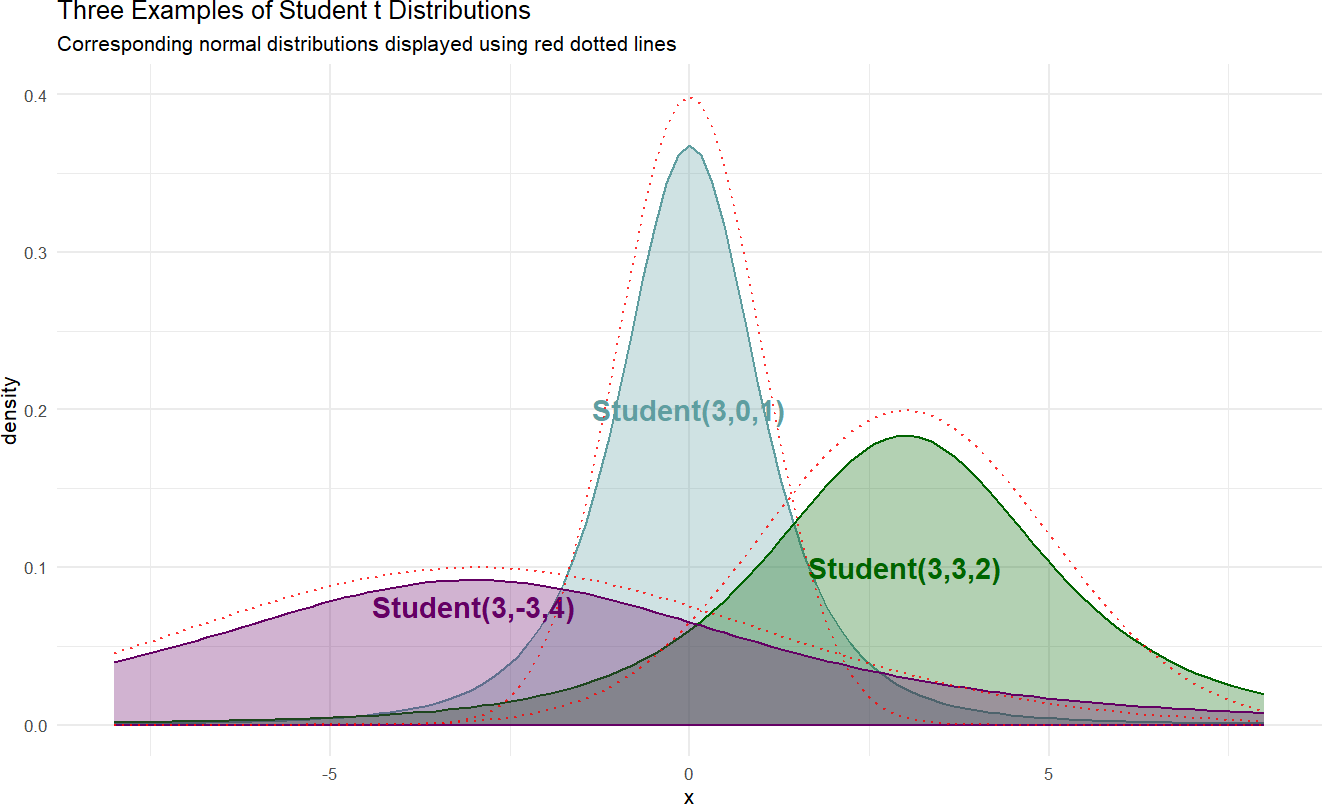 Calling greta, we get our representative sample of the posterior distribution:

And then, plot the credible values to observe very similar results to those using the \(\textrm{normal}\) distribution: 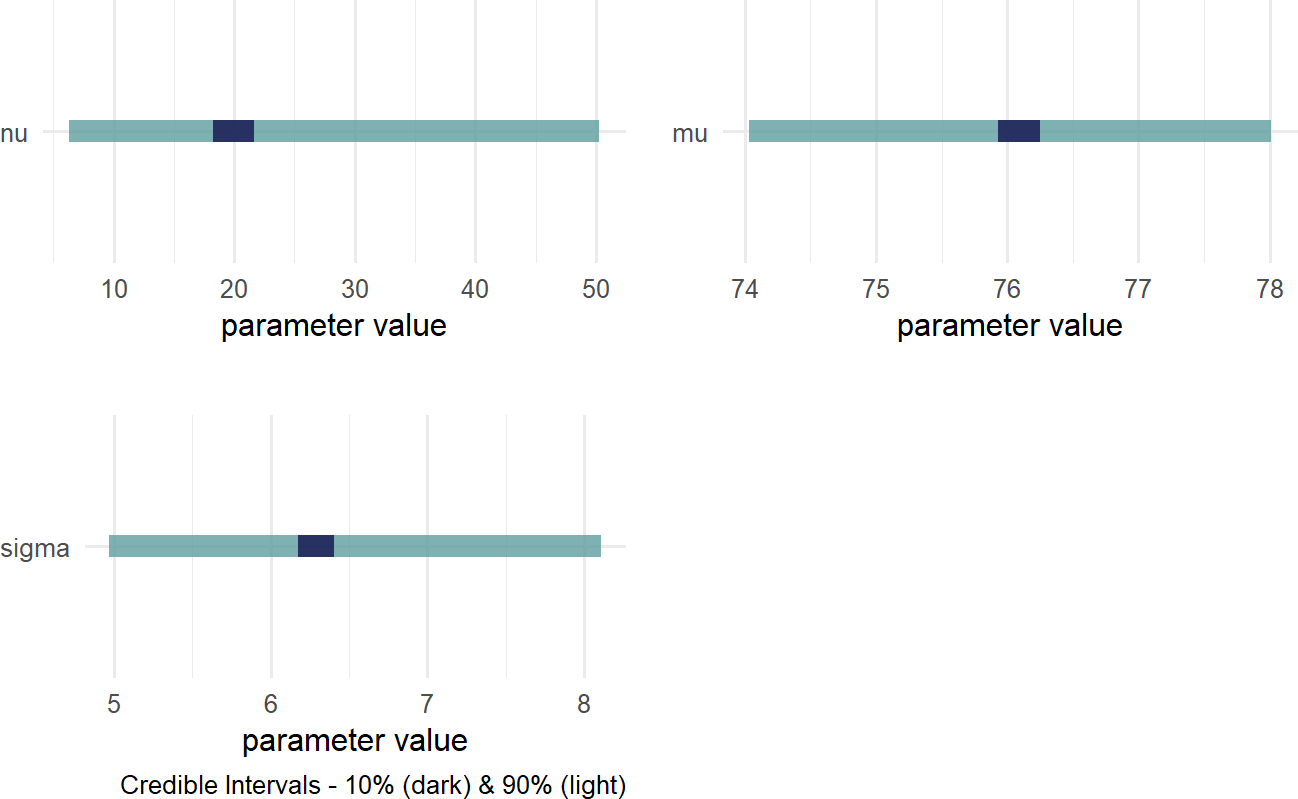 The wide distribution for \(\nu\) can be interpreted as saying we do know how fat the tails for this distribution should be. Which makes sense! You need alot of data to potentially observe outliers, so with only 31 observations our generative model remains uncertain about this degrees of freedom parameter.

To highlight the robustness of the \(\textrm{Student-t}\) distribution to outliers and the lack of robustness of the \(\textrm{normal}\) distribution, let’s add a mismeasured cherry tree height to the data. While most heights are between 60-80 feet, a mismeasured and truly unbelievable height of 1,000 is added to the data (i.e. dataWithOutlier = c(trees$Height,1000)). Figure 19.10 shows recalculated posterior densities for both the normal and student t priors.

Figure 19.10: Estimates of a distributions central tendency can be made to downplay outliers by using a student t prior distribution for the mean. 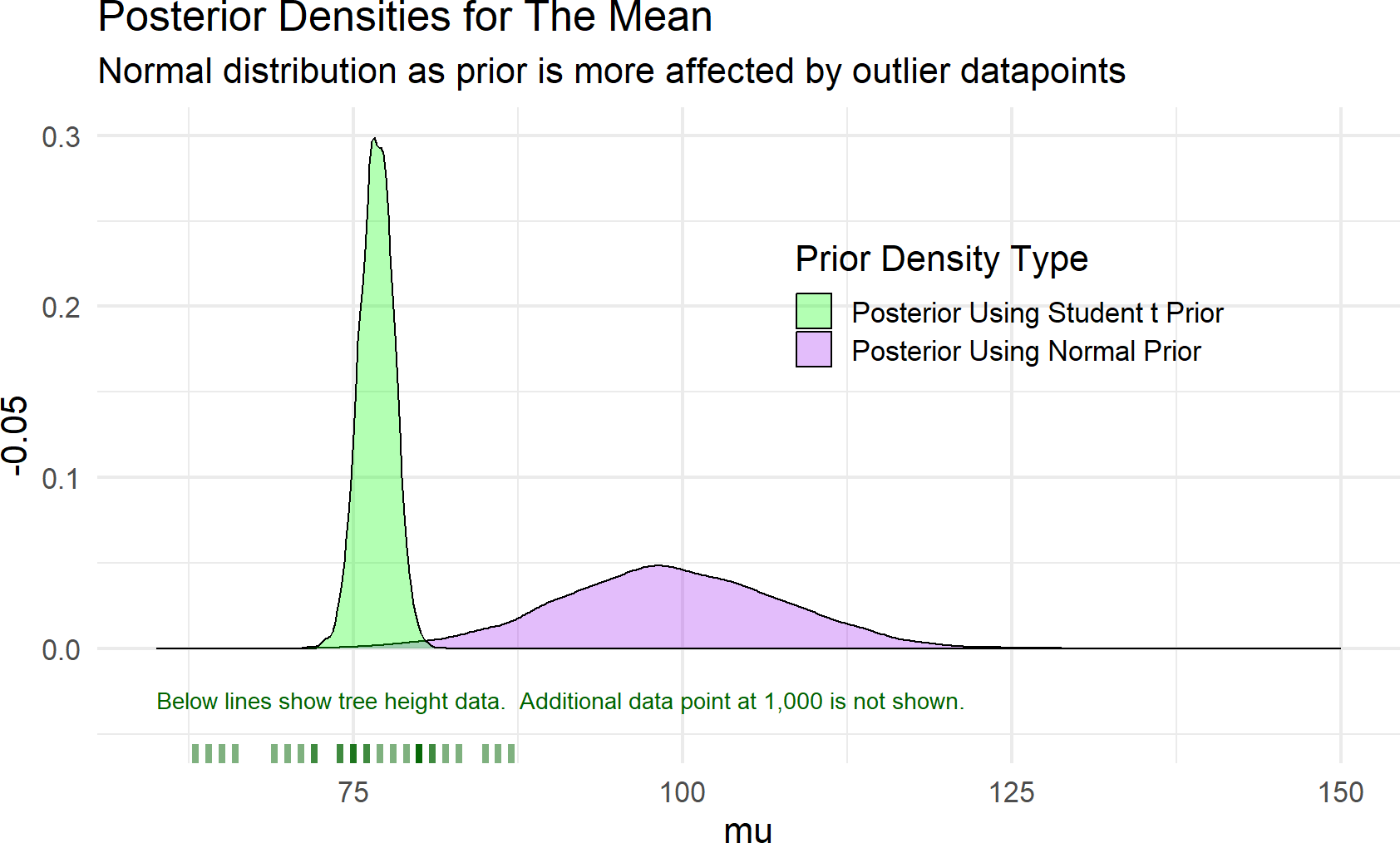 As seen in Figure 19.10, the posterior estimate of the mean when using a \(\textrm{normal}\) prior is greatly affected by the outlier data point - the posterior average height gets concentrated around an absurd 100 feet. Whereas, the \(\textrm{Student-t}\) prior seems to correctly ignore that mismeasured data and concentrates the posterior expectation of average cherry tree height around 76 (as discovered previously). While in this case, ignoring the outliers is desirable and the student t distribution provides a robust method for discounting outliers, all modelling choices should be made so that the posterior distribution accurately reflects your prior expectations of how data should be mixed with prior knowledge.

There are several assumptions about Poisson random variables that dictate the appropriateness of modelling counts using a Poisson random variable. Three of those assumptions are: 1) \(k\) is a non-negative integer of counts in a specified time interval, 2) the rate at which events occur is constant, and 3) the occurence of one event does not affect the probability of additional events occurring (i.e. events are independent). As an example of violating the second assumption, it would not be appropriate to model arrivals per hour to a restaurant as a Poisson random variable because the rate of arrivals certainly varies with time of day (e.g. lunch, dinner, etc.)

Let’s create a dataframe of tickets issued on Wednesday’s in New York City, and then we will model the rate of ticketing on Wednesday using the Poisson likelihood with appropriate prior. 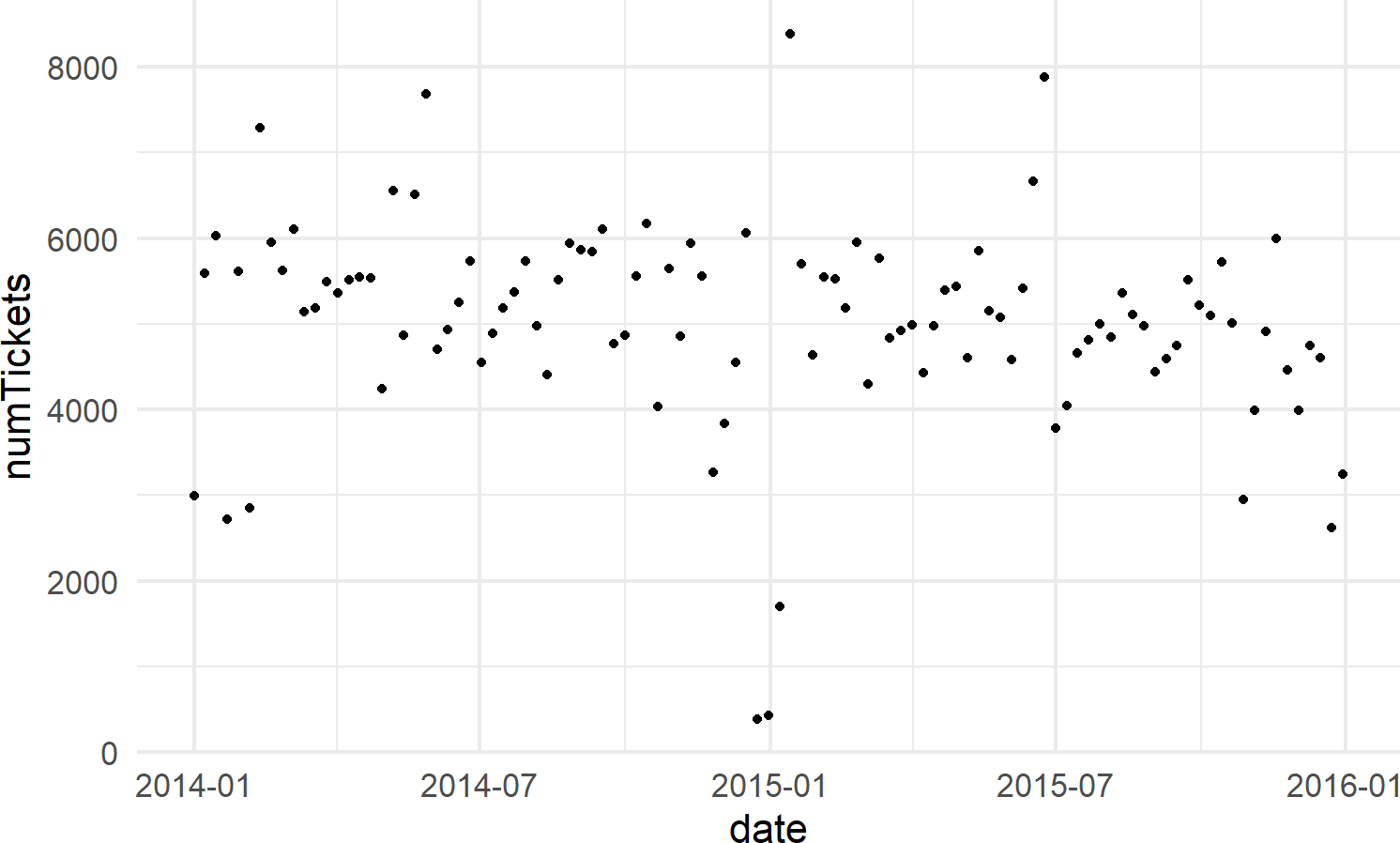 Now, we model these two years of observations using a Poisson likelihood and a prior that reflects beliefs that the average number of tickets issued on any Wednesday in NYC is somewhere between 3,000 and 7,000; for simplicity, let’s choose a \(\textrm{Uniform}(3000,7000)\) prior as in the following generative DAG:

Figure 19.13: A generative DAG for modelling the daily issuing of tickets on Wednesdays in New York city.

And extracting our posterior for the average rate of ticket issuance, \(\lambda\), yields the following posterior: 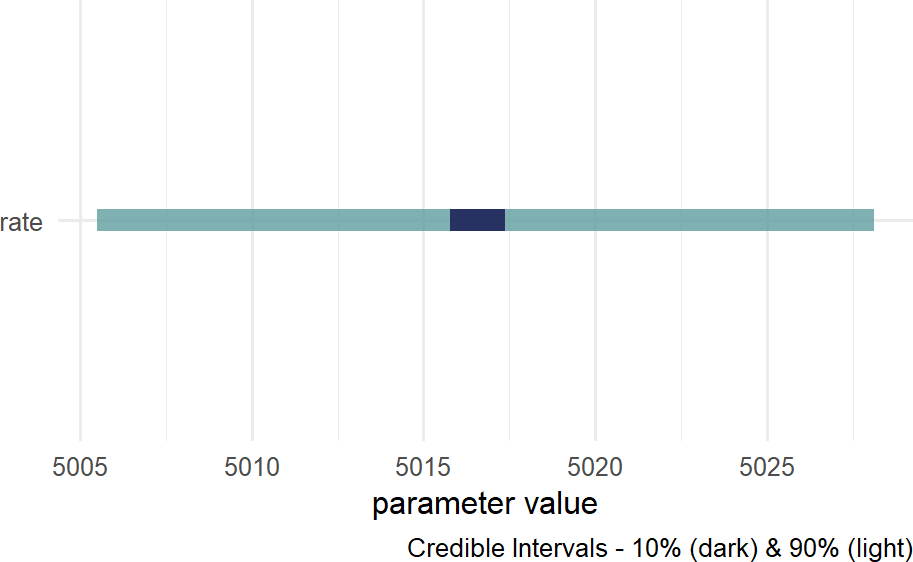 where we see that that the average rate of ticketing in NYC is somewhere slightly more than 5,000 tickets per day.