The aim of the grammar of graphics is to provide an efficient language for describing visualizations. Using this grammar, however, is no guarantee that a visual will prove to be compelling. The next question is to determine how to apply the grammar to a real problem - what data, mappings, and geoms have the highest potential of revealing the stories locked inside of data frames?

To ensure both the exploratory and persuasive powers of visualizing data, a four-stage workflow is recommended. The four stages in the visualization workflow are:

9.1 A Fully Worked Example of The Four Stages

By way of example, we work through three of the four stages of data visualization. The first stage, purpose, is defined for you to set the context for our example. The content, structure, and formatting will be decided as we go through the example. Read the following background about baseball in Colorado’s Coors Field:

Figure 9.1: Coors Field baseball stadium has a reputation as a park that is friendly to batters. http://en.wikipedia.org/wiki/Coors_Field

The purpose of our data visualization is 1) to confirm the Coors field reputation that it is the easiest baseball stadium for teams to score runs at, and 2) if true, create a visual that informs its audience that Coors Field is the easiest baseball stadium to score runs at - note, the purpose of the visual should be obvious to all who encounter it.

Coors Field (Figure 9.1) has a reputation for being friendly to batters - particularly for teams to score runs easily. Our purpose is to form a data-driven opinion about the validity of this statement and create a persuasive visualization to support our opinion.

To match our purpose, we need information about average runs scored per game at all baseball stadiums. And probably not just one game at each stadium, rather, we want a bunch of data from each stadium - say at least 100 games from each stadium. We can then compare Coors Field (three-letter code: COL) to all others. Luckily, the causact package has some data that seems relevant:

We will now switch to using library(tidyverse) instead of library(ggplot2) or library(dplyr) - it loads both of them with one command.

WOW!! There are 12,145 observations of baseball games spread over 30 teams. This should be about 400 observations per stadium - that will work. We just need to get average total runs by stadium:

Viewing the data, it seems obvious that we have the content we need. Let’s now structure the visualization using the most appropriate grammatical mappings.

WARNING: No matter how good a visualization might look aesthetically, if its content does not match the purpose of your analytic investigation, then it will be useless. For all visualizations, think of what matters.

Structure is our choice in how to display the content we have collected. This choice should reveal the most important data characteristics and the relationships we are analyzing. By choosing a meaningful geom and mapping of aesthetics to data, we can give our brains the best chance at perceiving meaningful patterns and insights.

To limit the scope of our options, let’s restrict ourselves to two geoms: geom_point() or geom_col() - often referred to as a scatterplot and a bar chart, respectively. These two seem to be the workhorses of my visualization efforts. In terms of aesthetic mappings, two main characteristics of the data determine the likely suitability of any aesthetic. The two are :

To see how to choose which aesthetics to map to different types of data, read through the below table specifying the ordinality and cardinality appropriate for each aesthetic:

Given that we have only two columns of data in our example baseball dataset, we can assess their ordinality and cardinality to see which aesthetics are even appropriate:

From the above table, we see that only the x- or y-axis is good for stadium name. Let’s suggest the x-axis and see how it works. For ‘avgRuns’ we saw more relevant aesthetics, but since y is not used and x/y-position is the most powerful aesthetic in visualization, we will map avgRuns to the y-axis. In terms of geoms, I am somewhat indifferent between points and bars, let’s try both. Points are shown in Figure 9.2.

Figure 9.2: Using points as the geom. 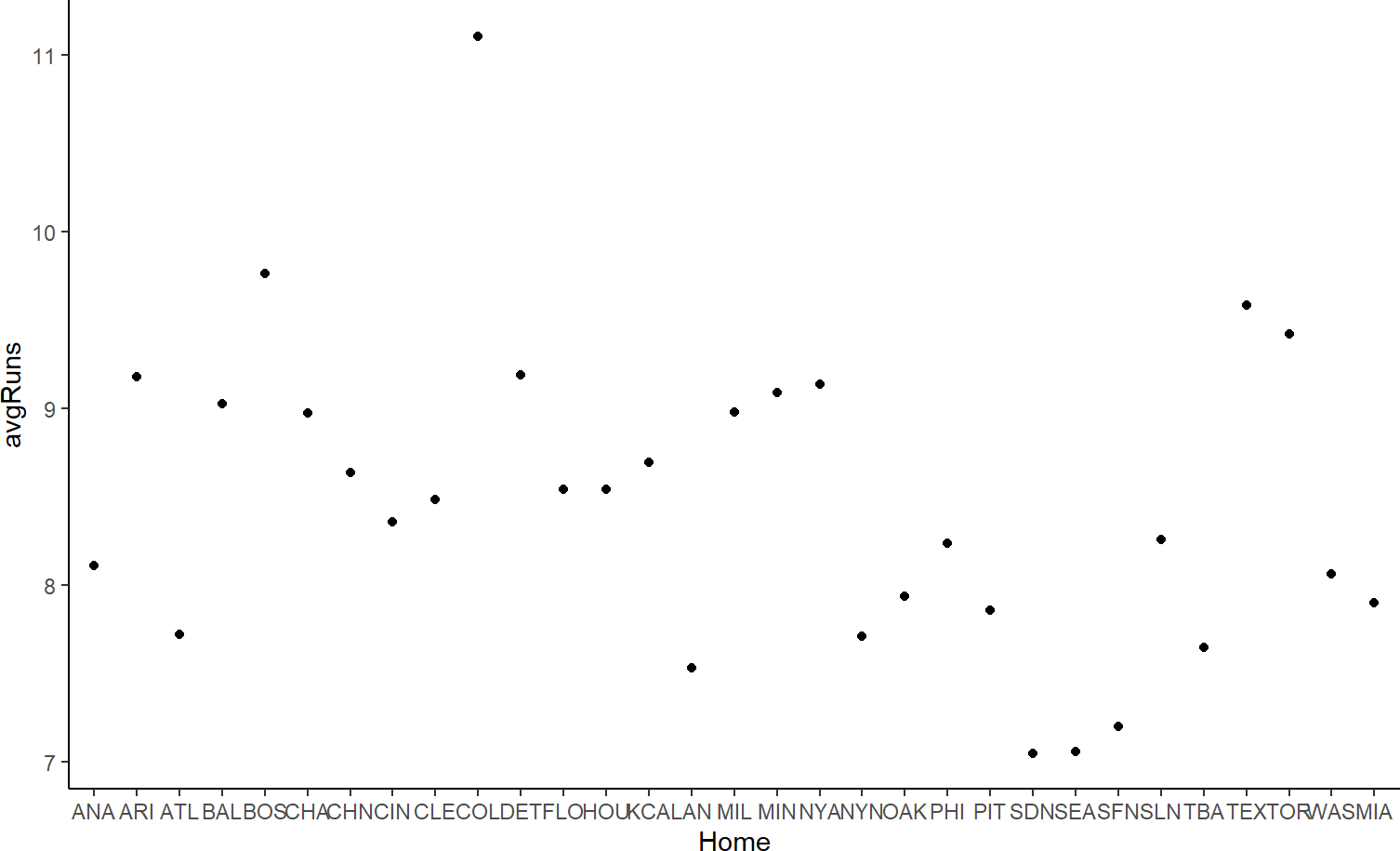 Figure 9.3: Using columns as the geom. 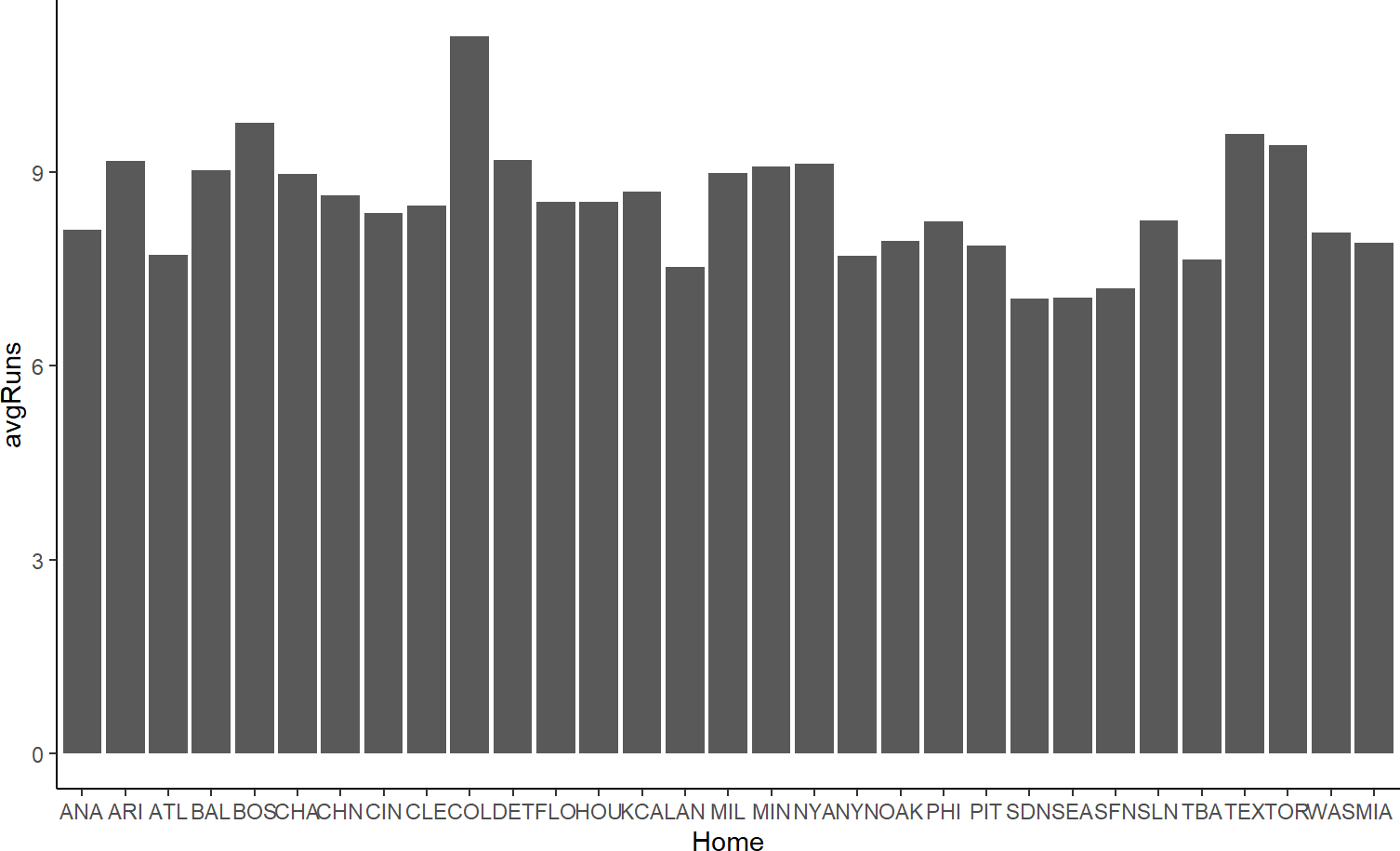 Figure 9.3 feels mildly better to Figure 9.2, the bar height helps trace the connection of each data value to its x-axis value.

As is often the case with using geom_col() I will recommend flipping the axes when the x-axis labels look crowded. Figure 9.4 is a preferred result to my eye:

Figure 9.4: Using columns as the geom and flipping the axes. 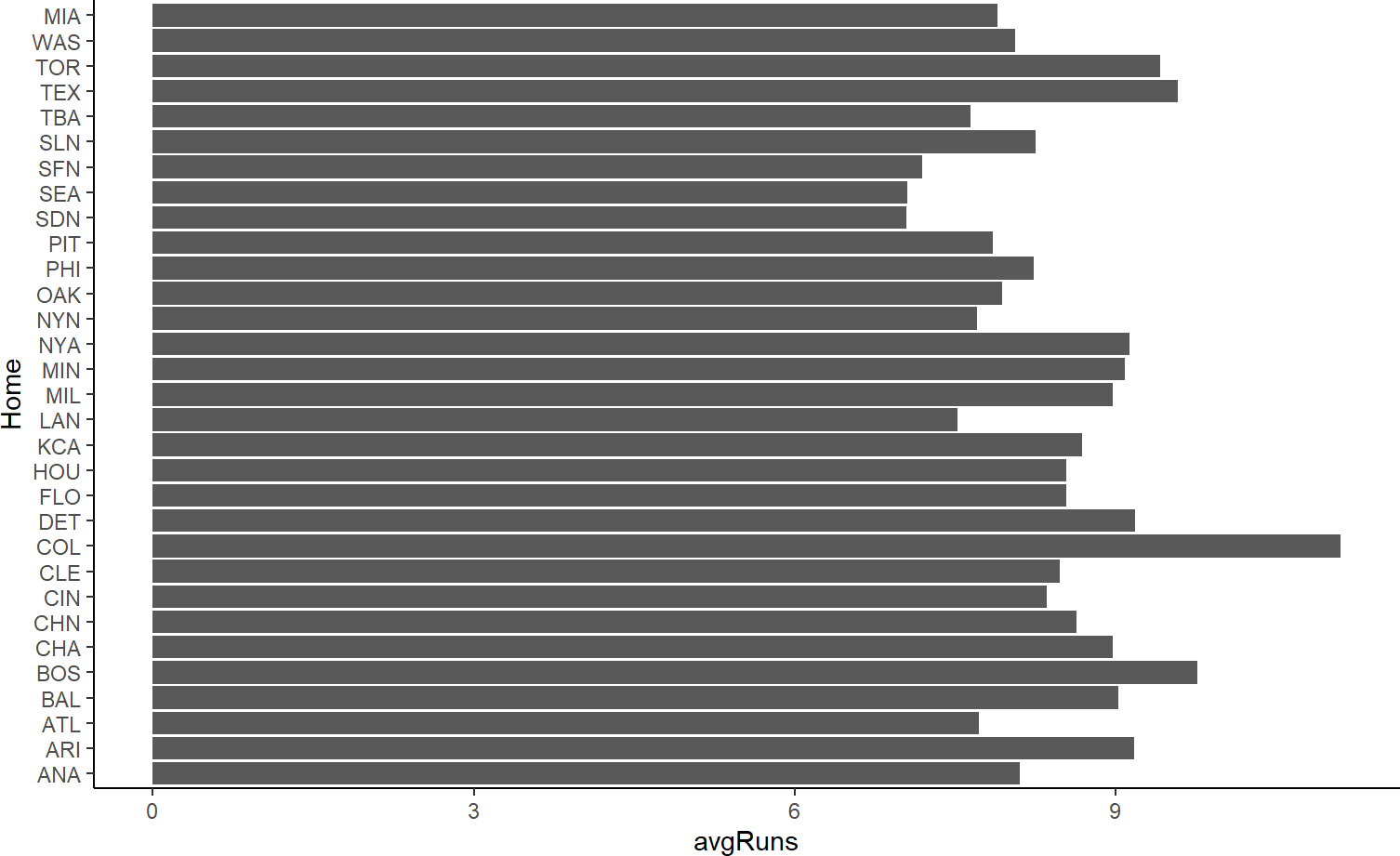 If you were only trying to convince yourself that Coors Field is truly the most run-friendly baseball stadium, I recommend stopping here. However, if you need to convince others, then the plot’s purpose and result should be made easier for an audience to digest. That is the goal of formatting.

The last stage of data visualization is formatting. In exploratory data analysis, the work on this step should be minimal. However, once you go beyond exploration and your visualization is to be shared, then you should spend considerable time formatting your work to be persuasive. There is always a little productive struggle required to get things perfect, so bring your patience and perseverance to this step.

The easiest fix to ensure your audience gets the message of your visualization is to add a title. The title should be the message, not just a description of the plot:

Figure 9.5: Add the purpose from stage 1 as your title. 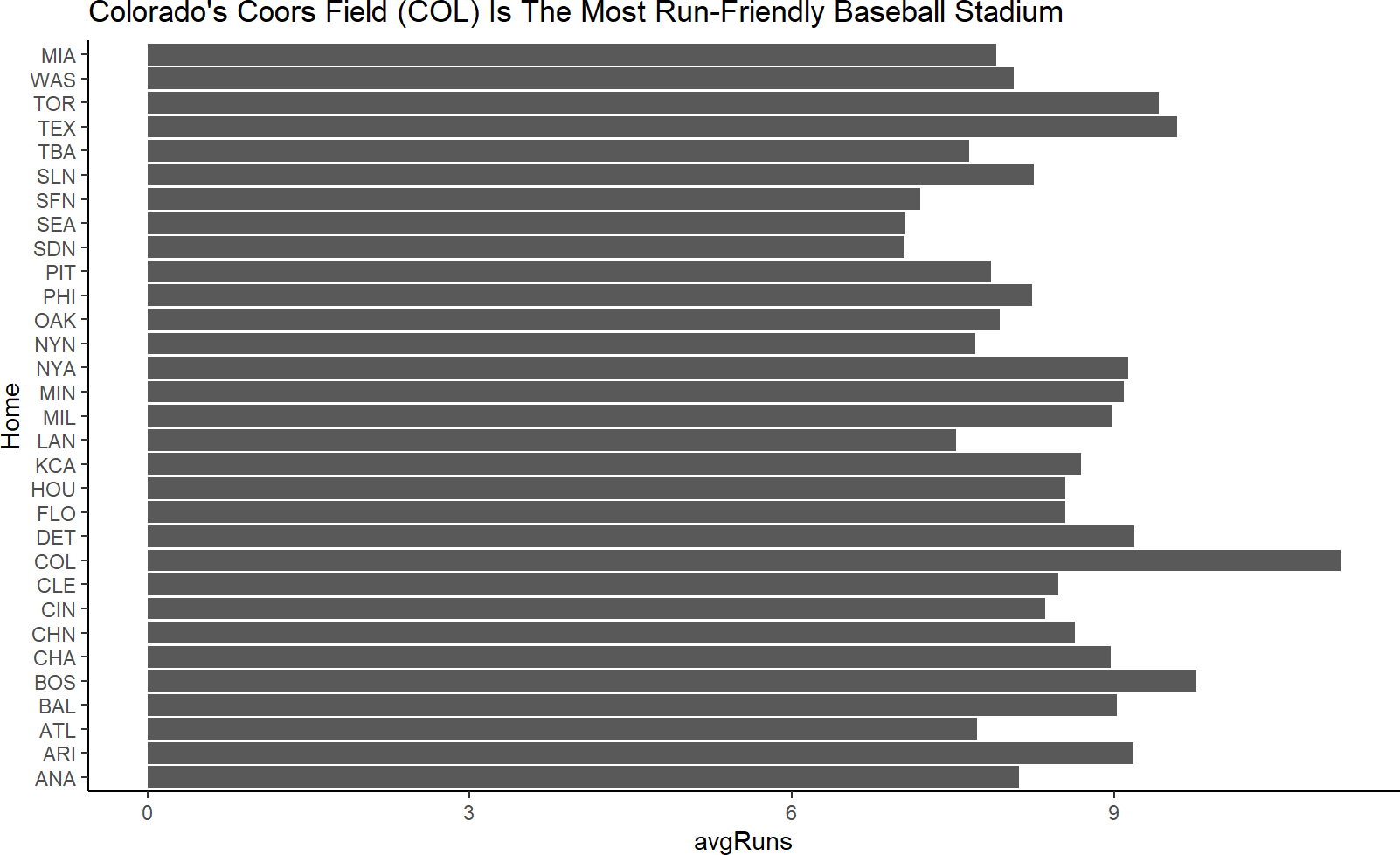 Notice, the code to create Figure 9.5 added a labels layer (i.e. using the + sign and labs function). In addition to title, the arguments of the labs function include x for the x-axis label, y for the y-axis label, subtitle and caption. Let’s take the time now to at least make our axis labels more meaningful to an external audience and use the caption capability to communicate our data source:

Figure 9.6: Add meaningul axis labels and a caption of the data source information. 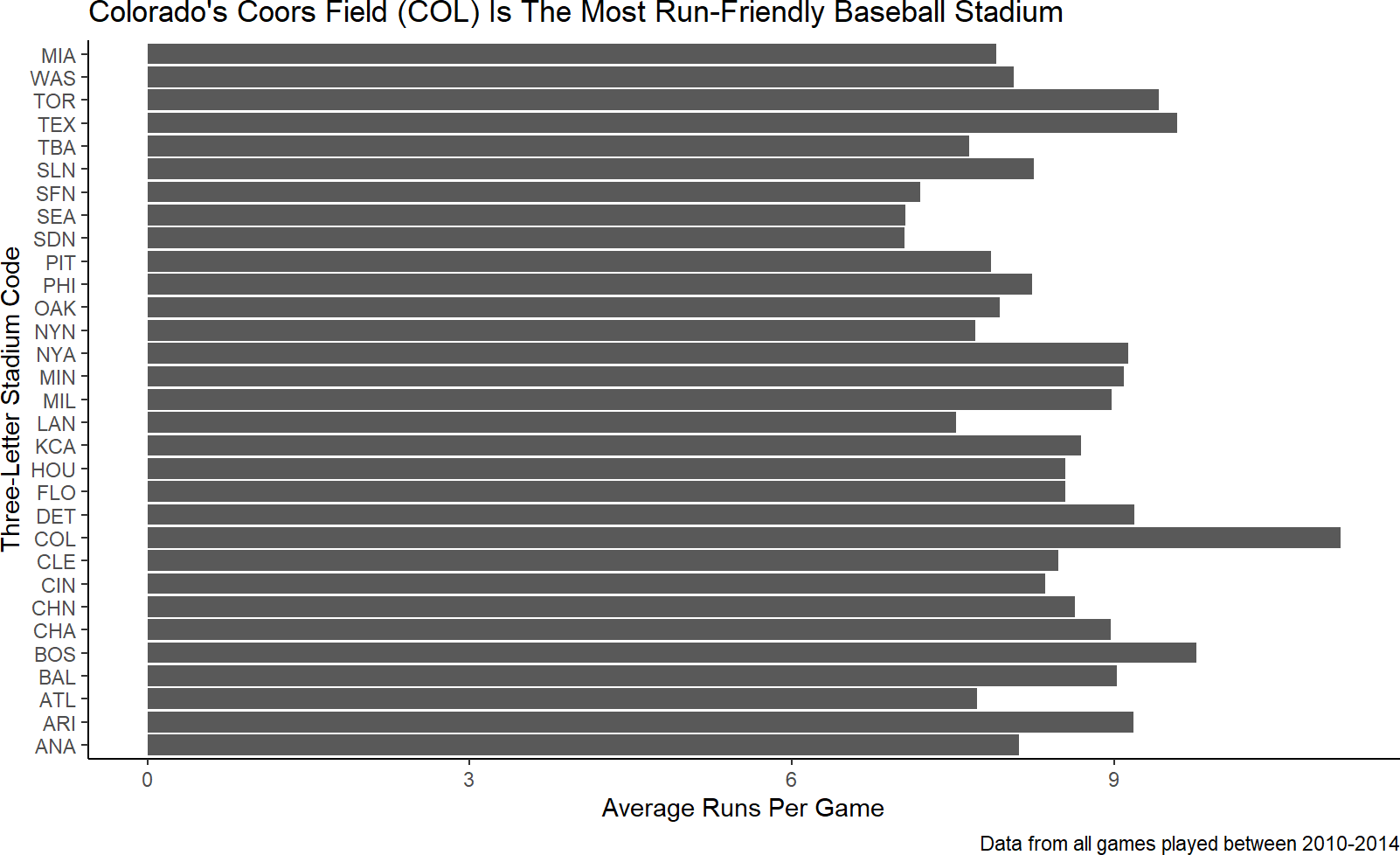 For the next iteration of formatting, ask yourself how can I accelerate the rate at which my external audience can confirm the plot’s title/purpose from the visual. To do this, I need the audience to be able to 1) find Coors Field on the plot and 2) quickly assess that Coors Field is truly the most run-friendly.

Finding Coors Field can be made easier by highlighting it. Of all the remaining aesthetics we can choose from to use, fill is going to be the most powerful. A quick attempt to use fill to distinguish among stadiums might look like this:

Figure 9.7: A hasty attempt at helping direct the audience to find Coors Field more easily. This is a terrible plot because color is not a good aesthetic for 31 unique elements (i.e. stadiums). 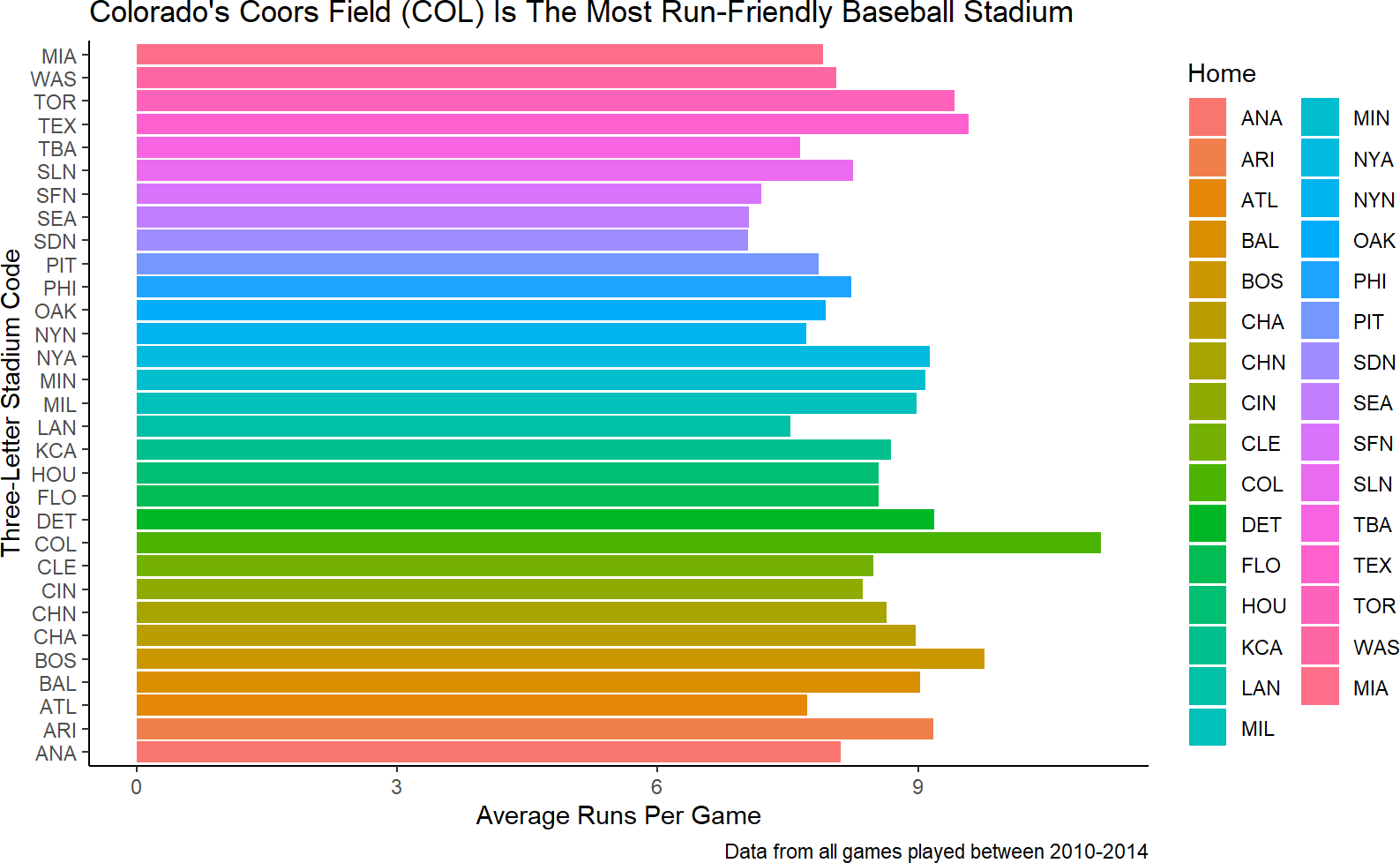 Figure 9.7 is unsatisfying and shows the danger of mapping a higher cardinality data column to color. We really just want Coors Field to be highlighted. This means we need another column of data. In fact, we need an indicator function (recall from dplyr chapters) that supplies the data which answers this question, and then, we can map that data to the fill aesthetic.

The indicator can be created with mutate and we will call the new dataframe plotDF for lack of creative naming capabilities and to communicate this data column is for plotting purposes:

and now we can change the data argument and the fill aesthetic of the previous plot to map to our new column:

Figure 9.8: Mapping the fill aesthetic to an indicator function of whether the stadium is Coors Field or not. 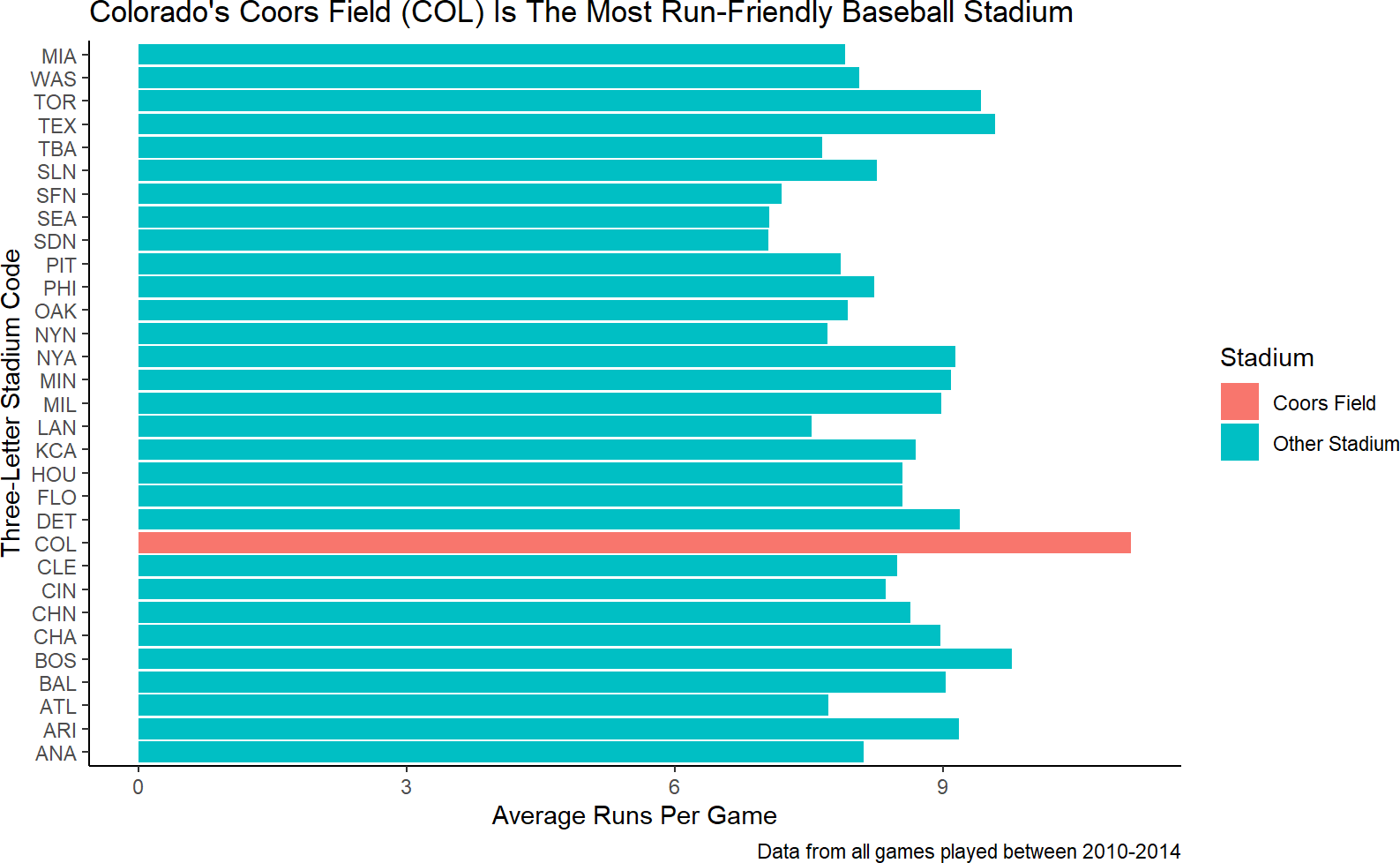 Accelerating an external audience’s assessment of Coors Field as the most run-friendly stadium is the last bit of formatting we will tackle here. Looking at the data mapped to the vertical axis of Figure 9.8, we see the order/positioning of the stadiums is arbirtrary - it seems sort of alphabetical. Let’s try to use position order of the stadiums to reflect run-friendiness.

Just how is position order determined? Well notice that stadium is particular type of object in R called a factor:

Factors are useful whenever data has a fixed and known set of possibilities, such as the fixed set of baseball stadiums. We can see the order of a factor using the levels() function:

See https://forcats.tidyverse.org/ for more information about working with factors using the forcasts package that is part of the tidyverse package group.

Notice the order matches that of the vertical axis (from bottom to top) in Figure 9.8. To reorder a factor by another variable, we can use the fct_reorder function which takes two arguments: 1) .f - the original factor and 2) .x - another variable to reorder the levels by. By default, the .x variable is sorted in ascending order. Using fct_reorder within a mutate function, we can overwrite the levels of plotDF$Home and then plot the data:

Figure 9.9: Mapping the fill aesthetic to an indicator function of whether the stadium is Coors Field or not. 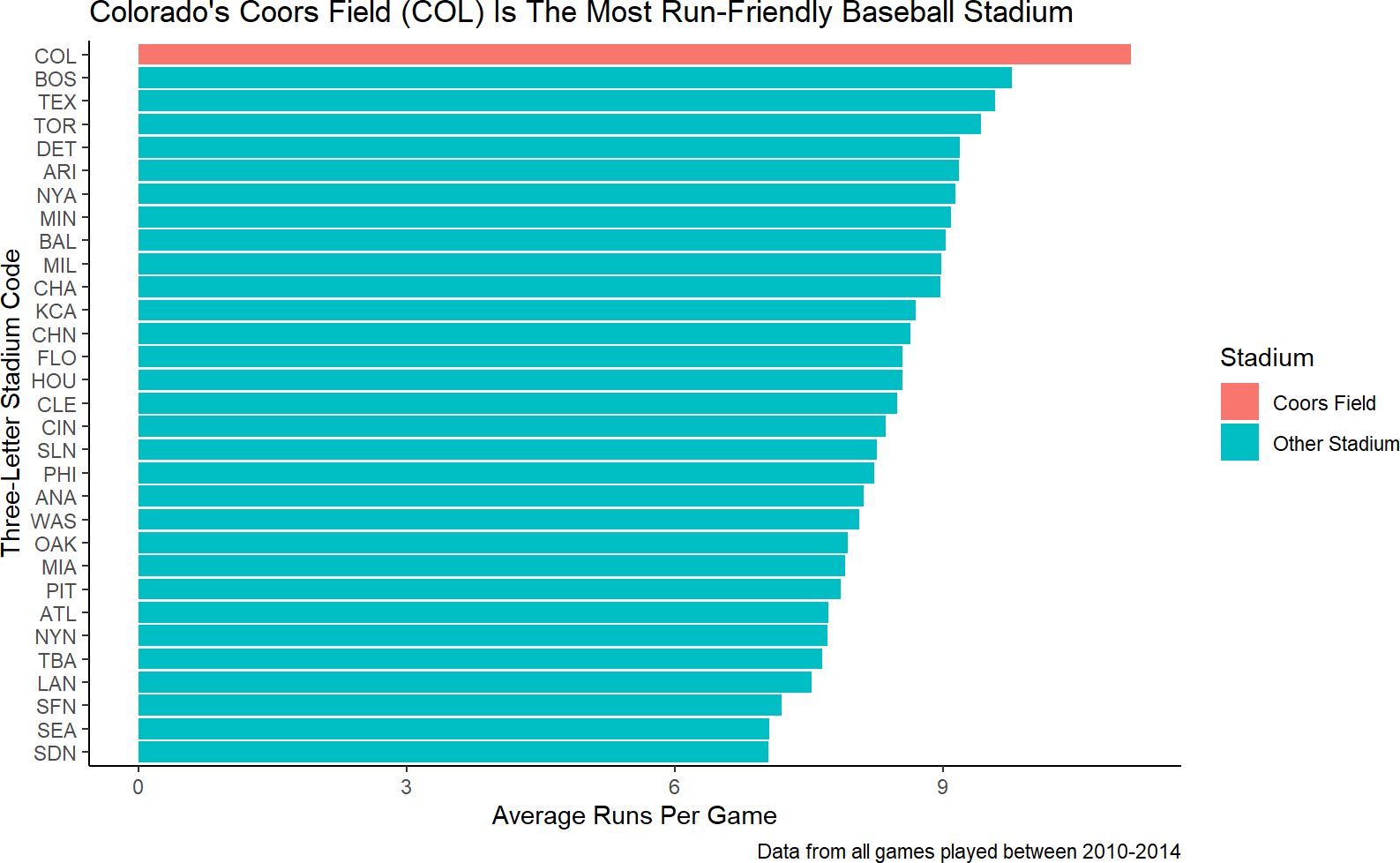 Often, in the final formatting, you will be dissatisfied with some of the default choices made by ggplot. For example, you may want to get rid of the grey background of your plots so that your plots look more like the ones in this book. Use a theme to do this. You can reproduce the book’s plots exactly by adding a theme layer to your ggplot and passing it a base font size of 14:

Figure 9.10: Code to make your ggplot plots match the style of this book’s plots. 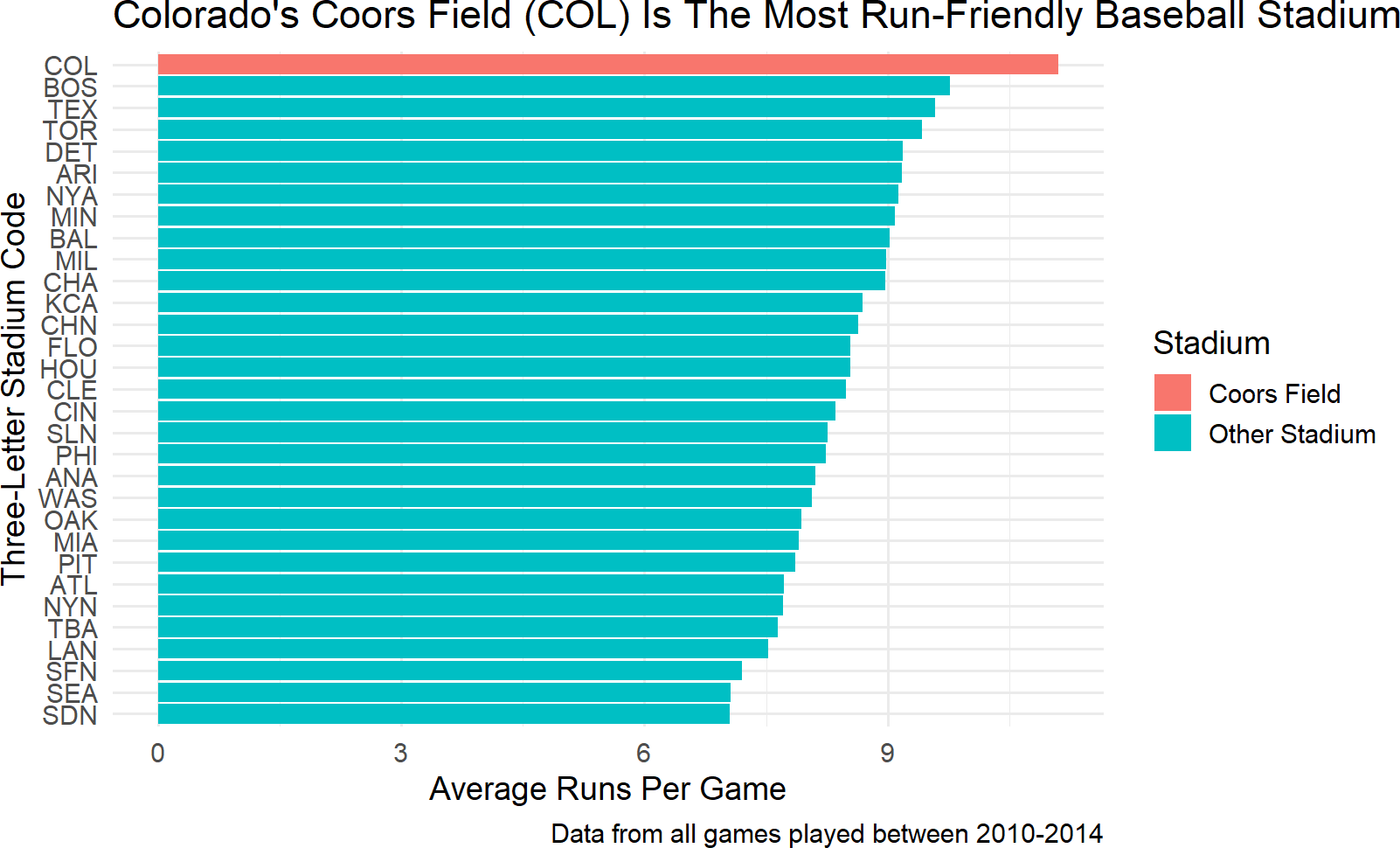 EXPERT TIP: Everytime I load ggplot2, I run this command theme_set(theme_minimal(14)) to avoid having to add the theme layer to each plot I make. It makes this theme the new default.

For controlling how a plot maps data values to a visual aesthetic, we use scales. The syntax for scales is scale_*_manual where * is replaced by an aesthetic such as fill, color, alpha, etc. For Figure 9.10, the ugly blue and orange colors really need replacing. I often like to use a color that people associate with the data to make mental connections that much easier. For example, the Colorado Rockies baseball team that plays at Coors Field uses black, white, silver, and purple as their team colors. Since purple is the most distinct of those colors, let’s use purple for Coors Field. For all other stadiums, I will diminish their impact be selecting a light gray. Here is the code you would add to get this effect: 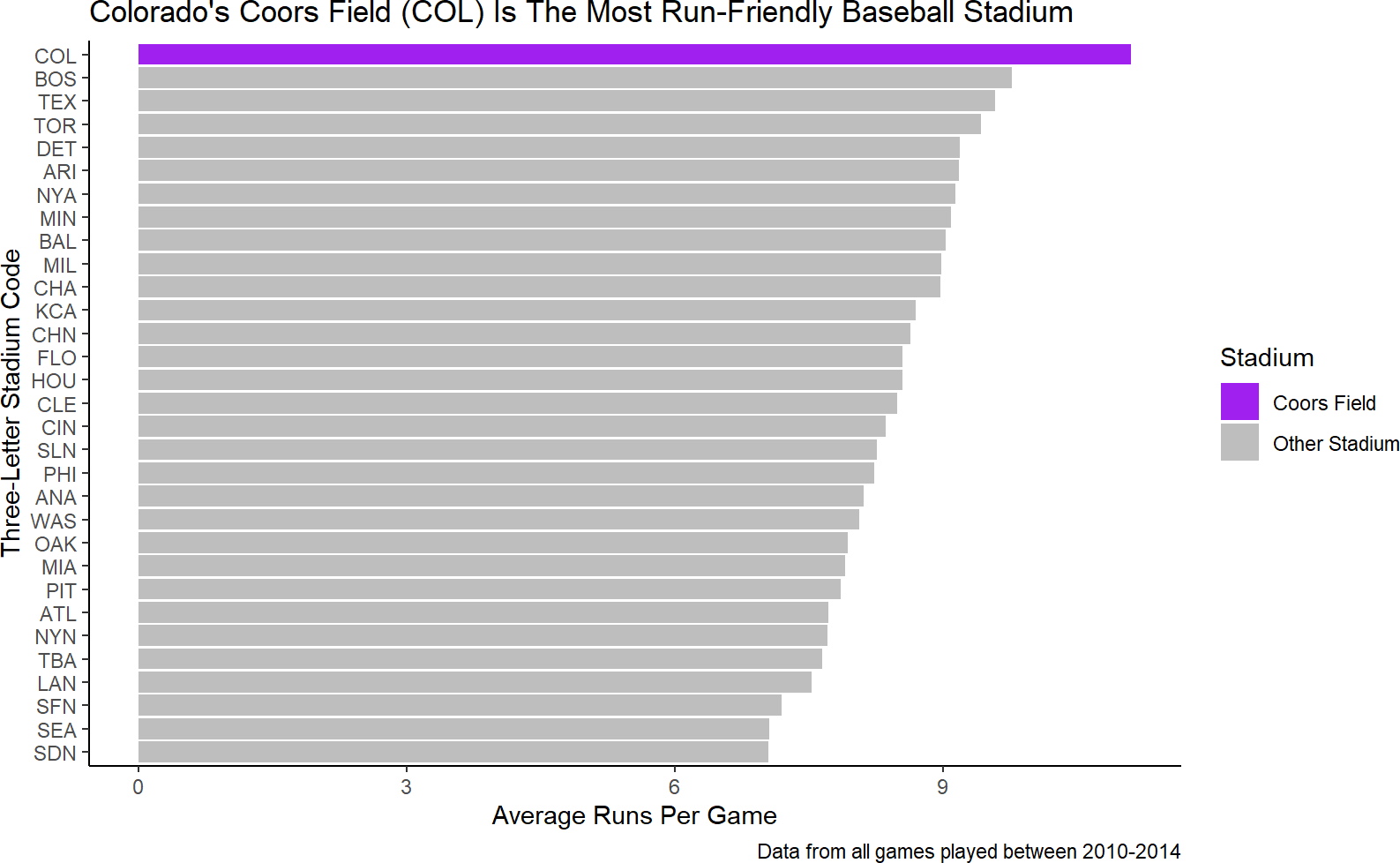 Figure 9.11: Instead of accepting the default colors, we manually supply colors to the fill scale to override the defaults.

You can find a list of all the named colors in R at http://www.stat.columbia.edu/~tzheng/files/Rcolor.pdf.

And while part of me wants to continue with some more tweaking, I will restrain myself and declare Figure 9.11 good enough - the purpose of the plot is both clear and easily digested by an external audience.

There are too many decisions made in visualization to comprehensively cover every scenario. I strongly encourage you to take a look at Claus Wilke’s work “Fundamentals of Data Visualization” (http://serialmentor.com/dataviz/) for more tips and tricks on aligning purpose, content, structure, and formatting decisions.

Additionally (https://github.com/rstudio/cheatsheets/raw/master/data-visualization-2.1.pdf) is a link to the data visualization cheatsheet produced by RStudio. Gain additional proficiency with ggplot by experimenting with the various layers, functions, scales, etc. that are described within it.