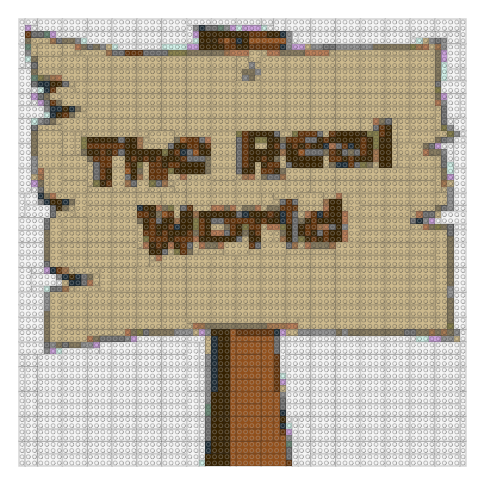 The fun brickr package converts images into a mosaic made of Lego building blocks. The above mosaic is put here to emphasize that we are learning building blocks for making models of data-generating processes. Each block is used to make some mathematical representation of the real-world. The better our representations, the better our insights. Instead of using Lego bricks, our tool of choice is the generative DAG. We have almost all the building blocks we need, latent nodes, observed nodes, calculated nodes, edges, plates, linear models, and probability distributions, but this chapter introduces one last powerful building block - the inverse link function.

The range of a function is the set of values that the function can give as output. For a linear predictor with non-zero slope, this range is any number from -\(\infty\) to \(\infty\).

Explanatory variable effects are fully summarized in the corresponding coefficients, \(\beta\). If an individual coeffiecient \(\beta\) is positive, the linear prediction increases by \(\beta\) units for each unit change in the explanatory variable. For example, we thought it plausible for the expected sales price of a home to go up by $120 for every additional square foot; 10 additional square feet, then the home value increases $1,200; 100 additional square feet, then the home value increases $12,000. You can continue this logic ad-nauseum until you have infintely big houses with infinite home prices. The takeaway is that linear predictors, in theory, can take on values anywhere from -\(\infty\) to \(\infty\).

While the beauty of these functions is that it allows us to use the easily-understood linear model form and still also have a form that is useful in a generative DAG. The downside is we lose interpretability of the coefficients. The only thing we get to say easily is that higher values of the linear predictor correspond to higher values of the transformed output.

When communicating the effects of explanatory variables that are put through inverse link functions, you should either: 1) simulate observed data using the prior or posterior’s generative recipe, or 2) consult one of the more rigorous texts on Bayesian data analysis for some mathematical tricks to interpreting generative recipes with these inverse link functions (see references at end of book).

Figure 23.1 takes a generic example of a Poisson count variable and makes the expected rate of occurence a function of an explanatory variable.

For a specific example, think about modelling daily traffic ticket in New York City. The expected rate of issuance would be a linear predictor based on explanatory variables such as inches of snow, holiday, president in town, end-of-month, etc. Since linear predictors can turn negative and the rate parameter of a Poisson random variable must be strictly positive, we use the exponential function to get from linear predictor to rate.

Figure 23.1: A generative DAG that converts a linear predictor into a strictly positive number. 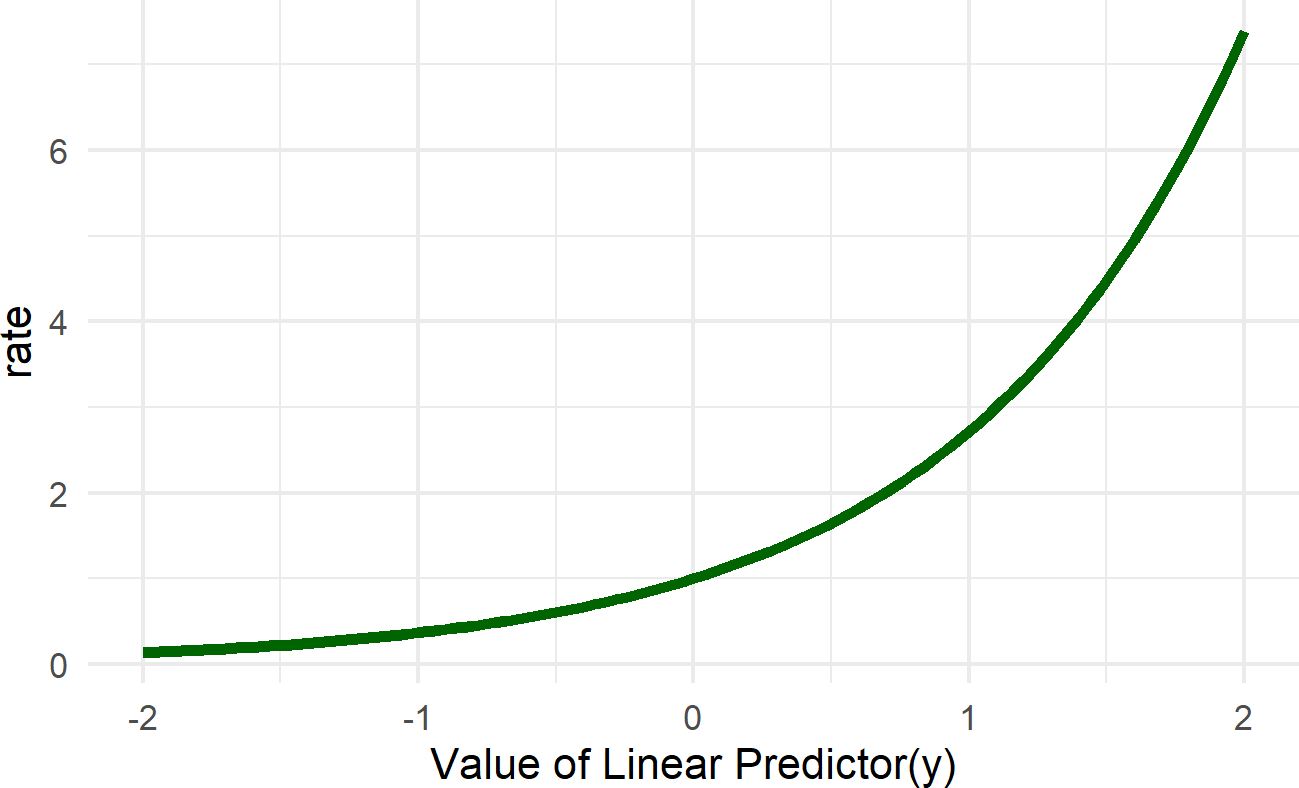 Figure 23.2: Graph of the exponential function. The linear predictor in our case is alpha + beta * x. The role of the exp function is to map this linear predictor to a scale that is non-negative. This essentailly takes any number from -infinity to infinty and provides a positive number as an output.

The inverse link function transformation takes place in the node for lambda. The linear predictor, \(y\), can take on any value from -\(\infty\) to \(\infty\), but as soon as it is transformed, it is forced to being a positve number. This transformation is shown in Figure 23.2.

Figure 23.3: A generative DAG that converts a linear predictor into a value between 0 and 1. 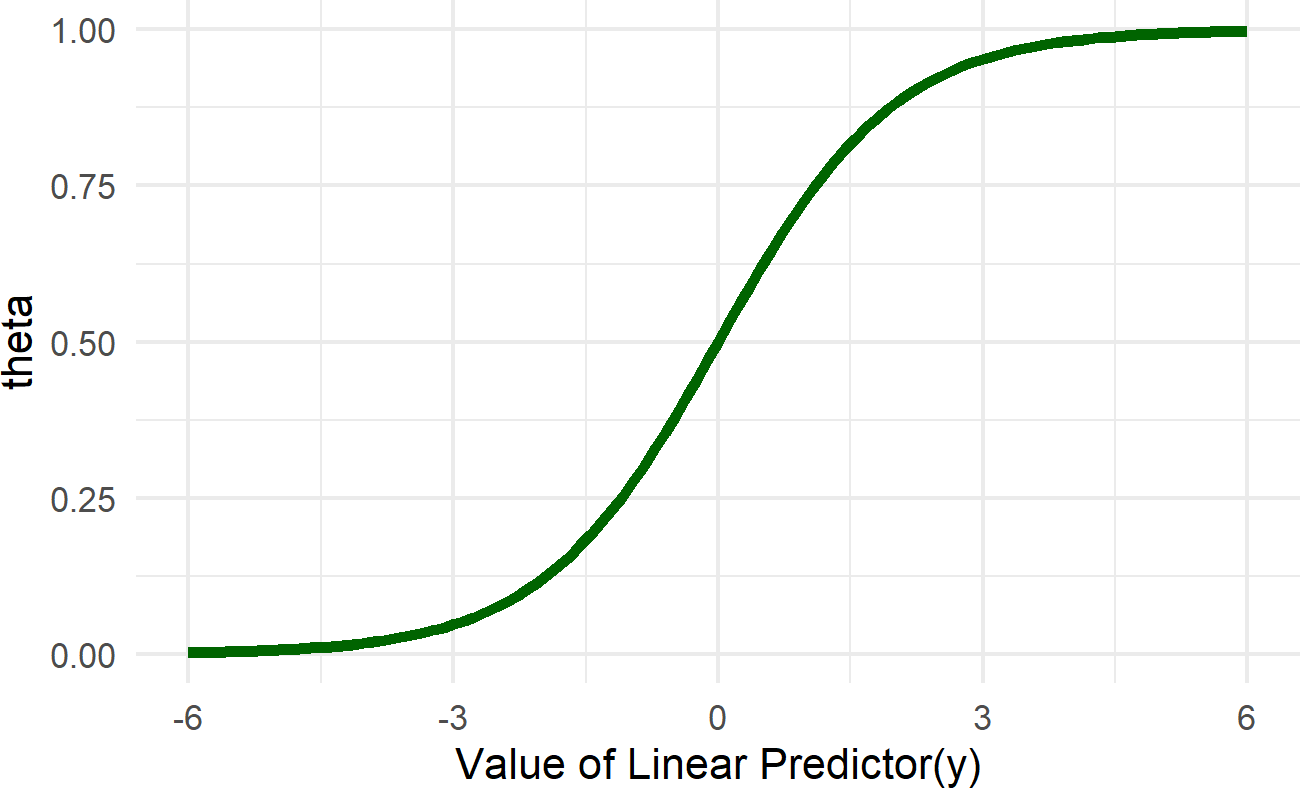 You have officially been exposed to all the building blocks you need for executing Bayesian inference of ever-increasing complexity. These include latent nodes, observed nodes, calculated nodes, edges, plates, probability distributions, linear predictors, and inverse-link functions. While you have not seen every probability distribution or every inverse-link, you have now seen enough that you should be able to digest new instances of these things. In the next chapter, we seek to build confidence by increasing the complexity of the business narrative and the resulting generative DAG to yield insights. Insights you might not even have thought possible!