Figure 18.1: Our typical generative model for Bernoulli data. In this chapter, we will move away from using a uniform distribution and explore the beta distribution as a prior distribution for theta.

Note the subtle difference in how probability distributions are used to model observed versus latent/unobserved variables. When observed random variables are modelled, it is to establish the likelihood component of Bayes theorem, i.e. \(P(Data|Model)\). When latent random variables are modelled, it is to establish the prior allocation of plausibility over all possible values, i.e. \(P(Model)\). Two important and contrasting implications regarding the generative model implied by a posterior distribution are: 1) the posterior recipe is restricted to modelling observed data as generated from the specified distribution, and 2) the posterior recipe is not restricted to a specific distribution when modelling uncertainty in latent variables. This tricky difference will be explored in this chapter, but if this is your first read-through, just remember that distributions modelling prior uncertainty do NOT imply that posterior uncertainty will also be from the same distribution.

Figure 18.1 is the generative DAG we have been working with to date. It contains two inter-related random variables \(X\) and \(\Theta\). For any observed realization \(x\), we assume it came from a \(\textrm{Bernoulli}(\theta)\) generating process; i.e. there is zero uncertainty that the data is generated from a \(\textrm{Bernoulli}\) distribution. Given a specified \(\theta\), the uncertainty in \(X\) is purely due to the stochastic nature of a Bernoulli random variable. The takeaway is that for observed data, our statistical model restricts the generative recipe to be from the specified family - i.e. Bernoulli.

The takeaway is that for unobserved data, our generative DAG contributes a prior, but the posterior for that RV is not restricted to be from the specified family. For example, the the posterior for \(\theta\) will not be uniform despite the uniform prior.

If we do not have uniform beliefs about plausible values for \(\theta\), there is another well-known and more-flexible distribution that can be used as a prior for \(\theta\). In other words, if you were to ask a statistician “what other distributions have support that ensures \(0 \leq \theta \leq 1\)?” a likely response you will get is the \(\textrm{beta}\) distribution. In the absence of a statistician, go to wikipedia, https://en.wikipedia.org/wiki/List_of_probability_distributions, and find a useful list of probability distributions. You’ll see the first one in the list is the Bernoulli distribution. To find others that might be useful in a certain case:

The wikipedia entry, https://en.wikipedia.org/wiki/Beta_distribution, for the beta distribution is where a statistician would go to recall details about this probability distribution. Its also good for us, but feel free to ignore the parts that seem ridiculously technical.

In this chapter, we investigate the \(\textrm{beta}\) distribution whose support is continuous on a bounded interval and lends itself nicely to model our assumptions about an unknown probability parameter.

18.1 A beta Prior for Bernoulli Parameter

Just like with any random variable, if we can create a representative sample, then we can understand which values are likely and which are not. In R, a representative sample can be created using rbeta(n,shape1,shape2) where n is the number of draws, shape1 is the argument for the \(\alpha\) parameter, and shape2 is the argument for the \(\beta\) parameter. Hence, if we assume

then we can plot a representative sample:

Figure 18.2: Histogram of representative sample for theta values when prior is beta(6,2) 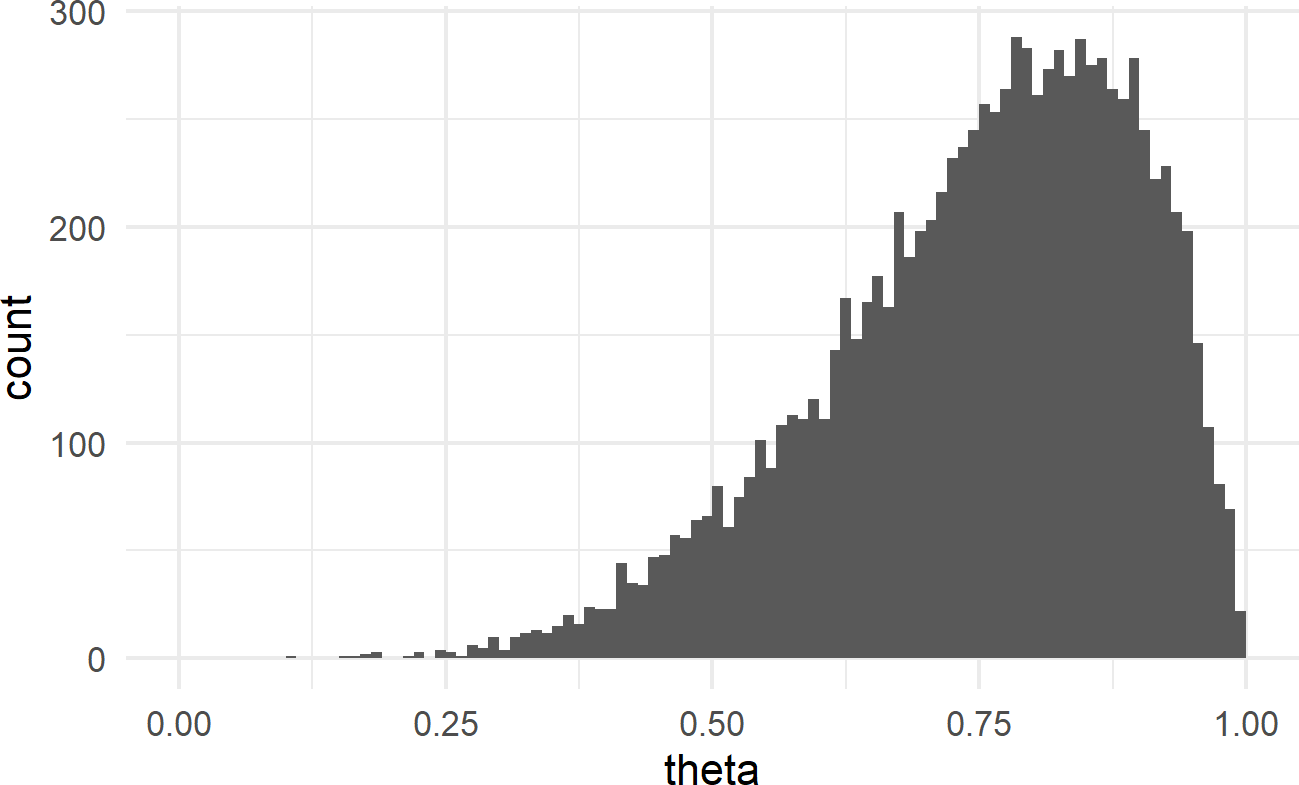 As a prior for a Bernoulli parameter, Figure 18.2 does seem valid in the sense that \(0 \leq \theta \leq 1\). Clearly however, this is not a uniform prior anymore. This prior suggests that values greater than \(50\%\) are much more likely than smaller values (i.e. there is more draws of higher theta values in the representative sample than lower theta values). So, to use this prior suggests that you have a strong prior belief that success is more likely than failure.

18.2 Matching beta Parameters to Your Beliefs

Figure 18.3: The exact probability density function for a random variable with a beta(6,2) distribution. 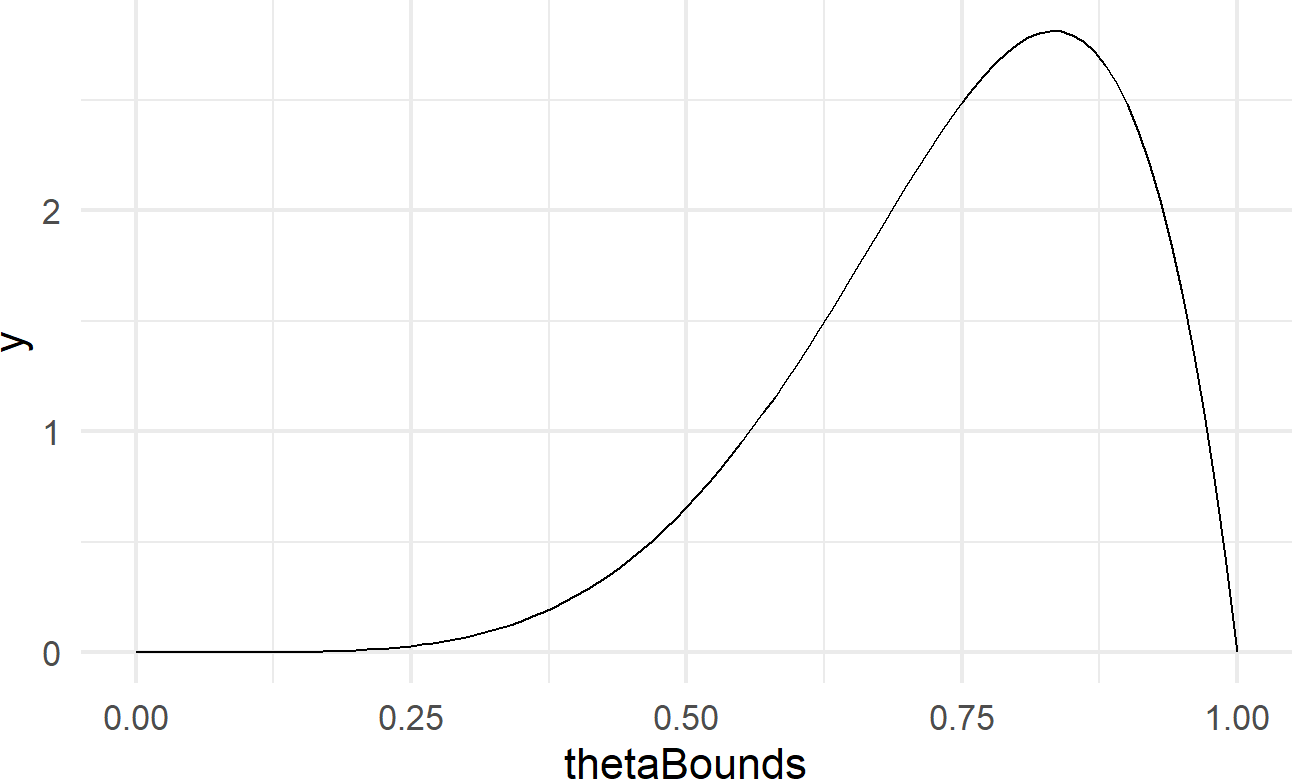 The function dbeta is an example of the dfoo functions discussed in the Representing Uncertainty chapter. For RV \(X\), it outputs the probability density function, \(f(x)\) for any given realization \(x\) following a \(\textrm{beta(}\)shape1,shape2\(\textrm{)}\) distribution. Since the \(\textrm{beta}\) distribution is continuous, we interpret higher density values as more probable and lower values as less probable. Recall from your stats class, the area under the density function represents probability and hence the area under any density curve is exactly 1. See https://youtu.be/Fvi9A_tEmXQ from Khan Academy for a refresher on probability density functions.

For most functions, stat_function is useful to get a quick visual. However, I prefer to use geom_area for probability density functions because the area under the curve represents probability and filling this area in with a color reminds us of this (see Figure 18.4 for example).

Figure 18.4: Using geom area instead of stat function to plot a beta(6,2) distribution. 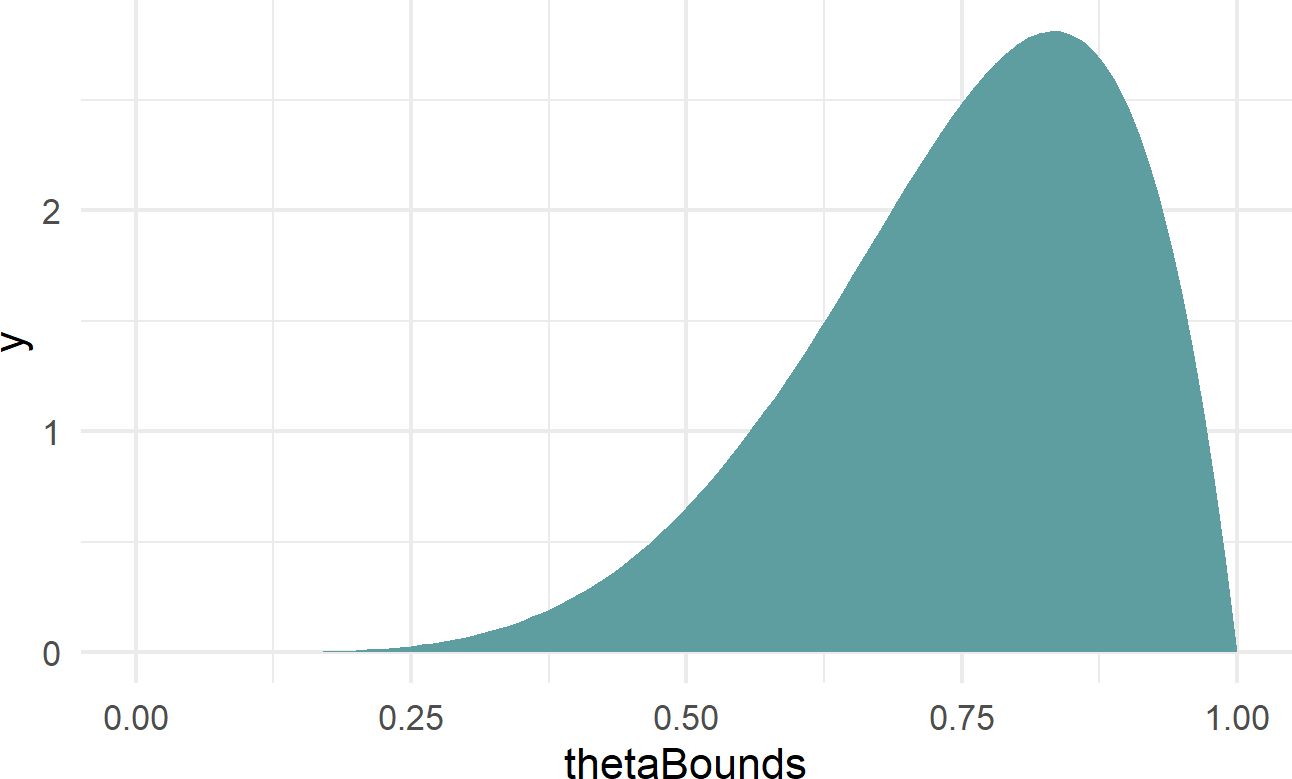 Figure 18.4 yields the same information as our representative sample shown in Figure 18.2; it just looks a little fancier. From the perspective of using the \(\textrm{beta}(6,2)\) to represent our beliefs about probability of success for a Bernoulli RV, we again see that higher probability values are more plausible than lower ones (i.e. there is more blue filled area above the higher theta values). If this represented our uncertainty in a trick coin’s probability of heads, we are suggesting that it is most likely biased to land on heads (i.e. more area for \(\theta\) values above 0.5 than below). That being said, there is visible area (i.e. probability) for the thetaBounds values below 0.5, so using this prior also suggests that the coin has the potential to be tails-biased; we would just need to flip the coin and see a bunch of tails to reallocate our plausibility beliefs to these lower values. 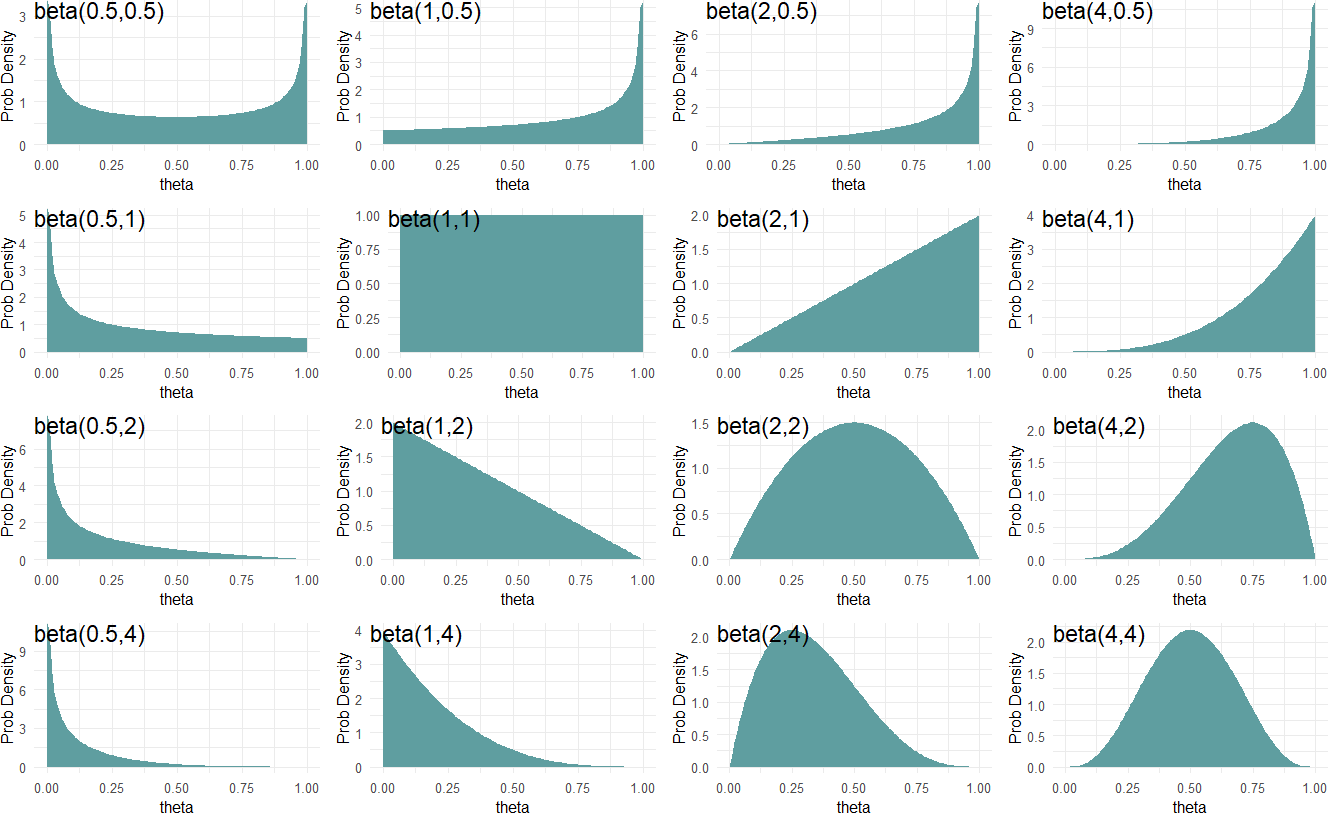 Figure 18.5: A diversity of beliefs about success probability can be modelled using different beta-distribution parameters.

\(^{**}\) See https://youtu.be/Fvi9A_tEmXQ for a refresher on continuous probability distributions.

The \(\textrm{beta}\) distribution has a very neat property which can aid your selection of parameters to model your uncertainty: 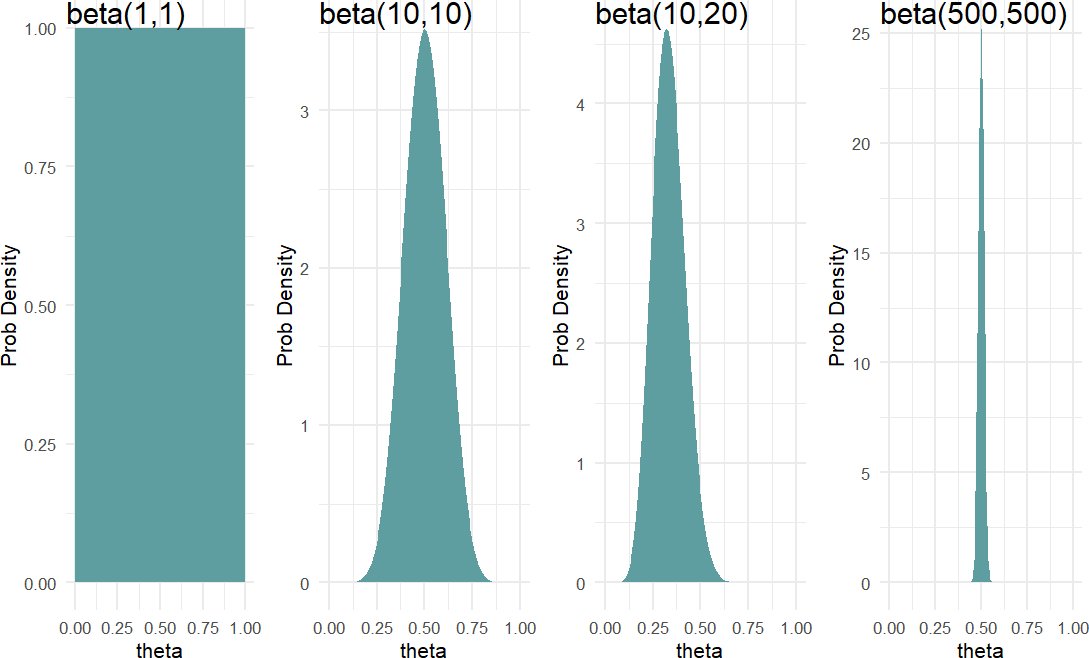 Moving forward, we will often use the \(\textrm{beta}\) distribution to represent our prior beliefs regarding a probability. The support is \((0,1)\) and it is able to adopt some flexible shapes. Take a moment and confirm that you can answer these thought questions:

Let’s now use generative DAGs with the \(\textrm{beta}\) distribution to see how priors and data observations come together to make a posterior distribution.

Figure 18.7: Graphical model for Bernoulli data with a beta prior.

Figure 18.7 is a generative DAG declaring a \(\textrm{beta}(2,2)\) prior as representative of our uncertainty in \(\theta\). We aren’t saying too much with this prior. This is a weak prior because. as we will see, it will be easily overwhelmed by data; its just saying that two successes and two failures have been seen. Let’s imagine that we observe 20 successes and only two failures. This data is highly consistent with a very large value for theta. We can intelligently combine prior and data using greta to get our posterior:

And once the posterior sample (drawsDF) is created, we can query the results and compare them to the \(\textrm{beta}(2,2)\) prior: 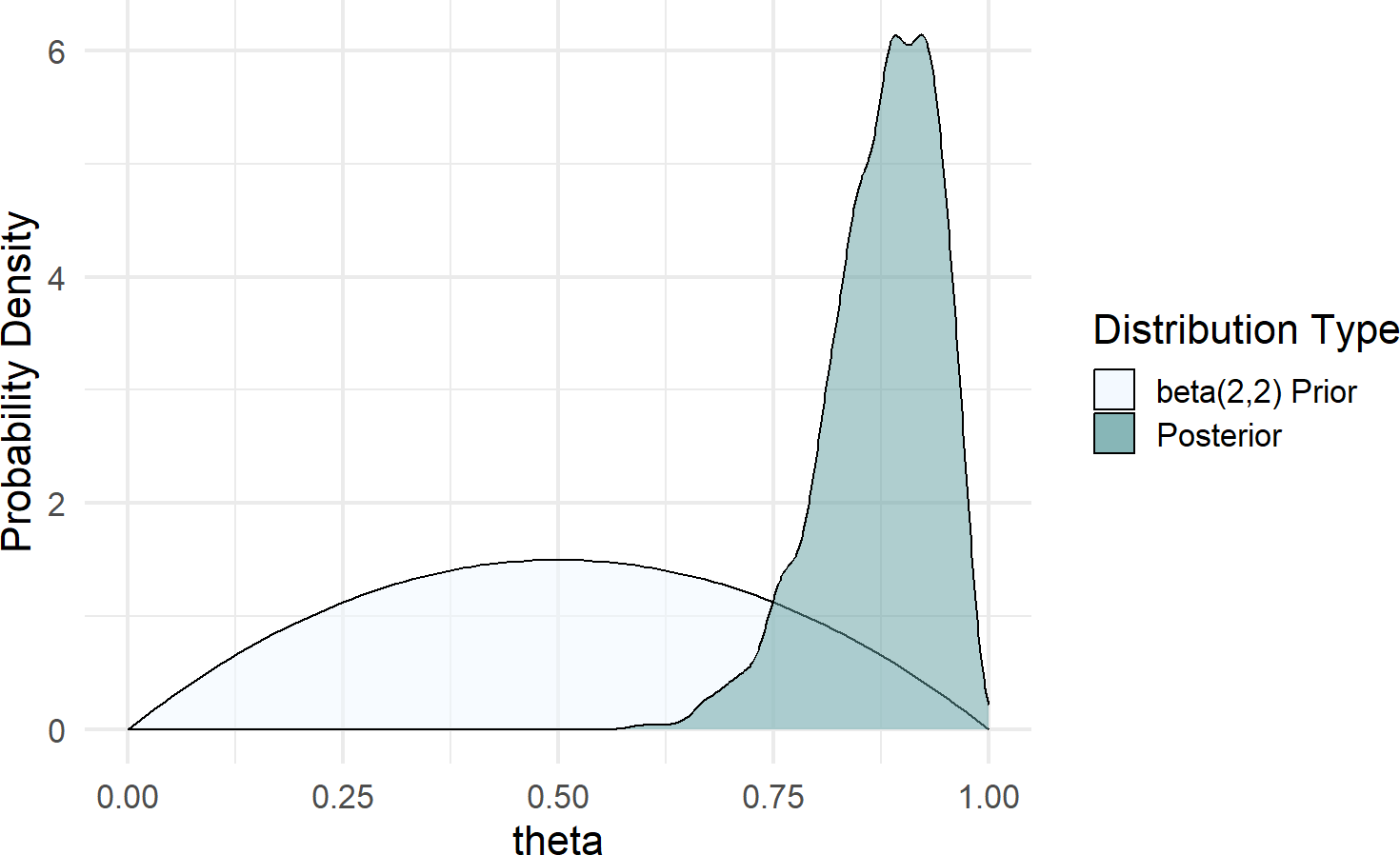 Figure 18.8 shows a dramatic shift from prior to posterior distribution. The weak prior suggest all values had plausibility, but once observing 20 successes out of 22 trials, the higher values for \(\theta\) are much more plausible.

If we want to change the prior to something stronger, say a \(\textrm{beta}(50,50)\), then we can rerun the greta code by rerunning the same code and just changing the one line for the prior: 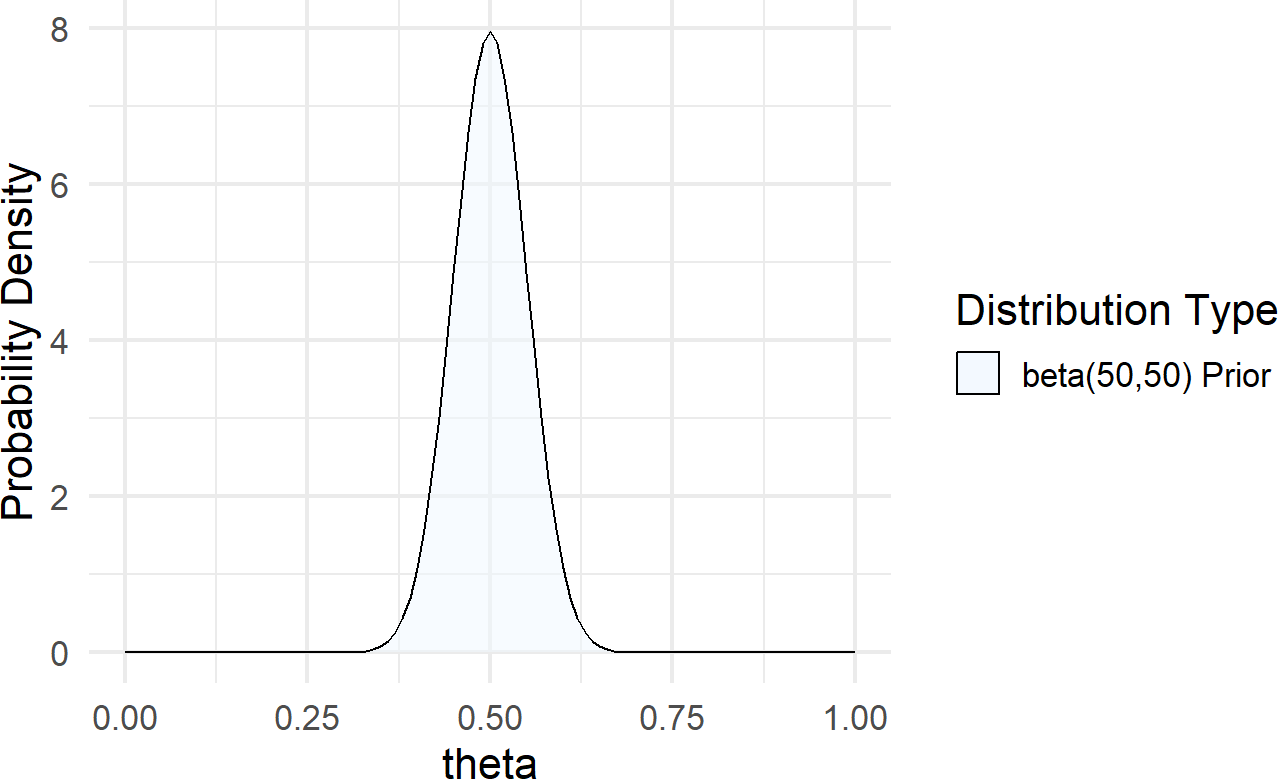 Figure 18.9 shows a posterior distribution that is only mildly shifted from its prior. This is a direct result of a strong prior due to the larger \(\alpha\) and \(\beta\) parameters. In general, we will seek weakly informative priors that yield plausible prior generating processes, yet are flexible enough to let the data inform the posterior generating process. There is a bit of an art to this and we will learn more in subsequent chapters.